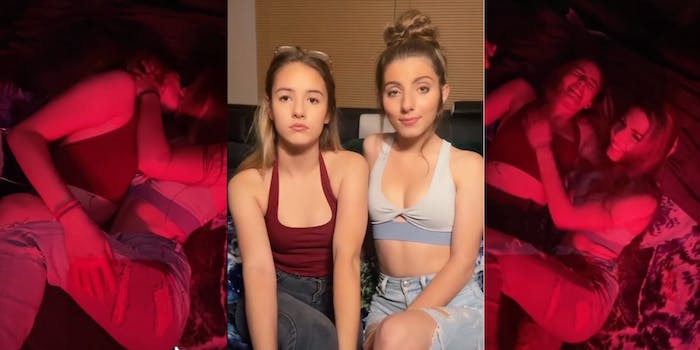 'This is just as bad as a straight man fetishizing lesbians.'

A recent “best friends kissing” TikTok trend prompted accusations of “queerbaiting” from a creator who says that heterosexual content creators are “banking on the fetishization of lesbians and queer women.”

A TikTok sound that combines Nelly Furtado’s 2006 song “Promiscuous” and an audio that says, “Two best friends in a room, they might kiss…yes we will” sparked a trend among individuals who jokingly flirt. Although some of the TikToks include couples, the videos that shows friends participating in the trend triggered claims of “queerbaiting.”

The trend has increased in popularity over the last few weeks, getting actress Joey King and singer Sabrina Carpenter to participate.

TikTok creator @maurena used the audio for a recent video and included the hashtags “#besties #kiss.” In the video, Maurena and her friend sit on a bed a Maurena lip syncs, “Two best friends in a room, they might kiss” and her friend lip syncs, “Yes, we will.” The clip transitions to the two making out under red lighting to the song “Promiscuous.”

Maurena, who did not immediately respond to the Daily Dot’s request for comment, has since turned comments off on both videos of her participating in the trend. TikTok creator @letsbeans stitched the video and criticized Maurena for “queerbaiting.”

“Because men fetishize lesbians, if you play into that imagery just enough, they will fetishize you and be more attracted to you,” @letsbeans says in their TikTok. “I, as a lesbian who talks about lesbian issues, have to sensor the word ‘lesbian’ every time and this gets over 7 million views, no problem.”

The content creator says that straight people will “never understand the terror that comes from being a lesbian in public.” Their video, which has accumulated over 123,800 views and 39,400 likes since Wednesday, received comments from individuals who said if they made the same video they would be “hatecrimed.”

Another commented, “I get physically ill thinking about men watching me with a woman. I’m genuinely afraid of people seeing me with a partner. It’s not a joke.”

In their video, @letsbeans says, “As straight girls, you will never understand the terror that comes from being a lesbian in public and being scared to do something as small as hold your partner’s hand or look at them in a certain way.”

They said Maurena’s video “is just as bad as a straight man fetishizing lesbians.”