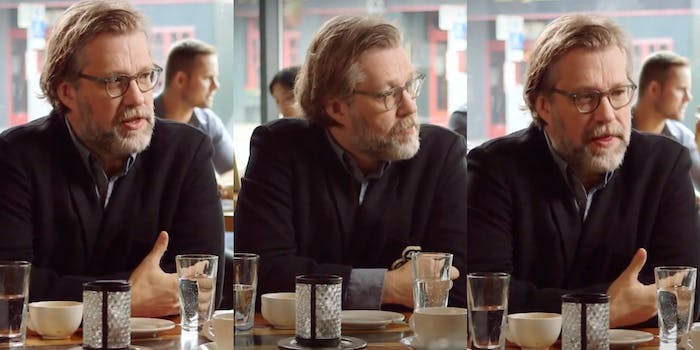 Musician and podcaster John Roderick, aka the “Bean Dad” who said he forced his child to spend six hours opening a can of beans, has been exposed as a racist, homophobe, and anti-Semite in a series of uncovered tweets.

The tweets were revealed after Roderick posted a viral Twitter thread about his 9-year-old daughter asking him for some baked beans and his strange, possibly abusive response.

Roderick tweeted that “there were tears” and declared that his daughter had figured out how to open the can after six hours.

“The can had been through hell,” he wrote. “Label ripped off, dented, sharpened and blurred, a veteran of a thousand psychic wars.

“I know this is parenting theatre in some ways,” he said. “I suffer from a lack of perseverance myself, and like all parents throughout history, I’m trying to correct my own mistakes in the way I educate my child. She sees through this.”

The tweets came off to many as a description of psychological abuse.

Following the viral thread, users’ investigation of Roderick’s now-deleted Twitter account revealed a deluge of highly offensive tweets from as early as 2011. In them, he uses slurs and racial slights including the N-word, “fag,” and “retarded.” In 2015, he wrote that “Hitler is entertaining.”

Roderick is also directly associated with Jeopardy! champion and interim host Ken Jennings, who was found to have tweeted offensive remarks about disabled people. Roderick and Jennings together host a podcast called Omnibus about “human history and achievement.”

On Sunday, Jennings defended his friend on Twitter. “If this reassures anyone, I personally know John to be (a) a loving and attentive dad who (b) tells heightened-for-effect stories about his own irascibility on like ten podcasts a week,” Jennings wrote. “This site is so dumb.”