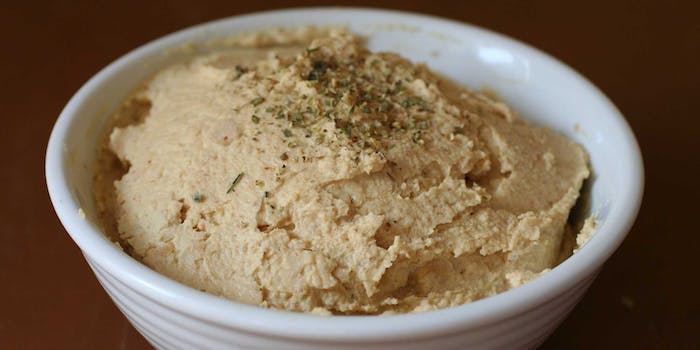 You know there are other kinds of hummus, right?

The Sabra Dipping Co. of hummus fame, announced on Wednesday the company was voluntarily recalling 30,000 cases of its smooth chickpea dip, over concerns that they had been contaminated with listeria.

According to the FDA, listeria sounds pretty terrible:

Listeria monocytogenes is an organism, which can cause serious and sometimes fatal infections in young children, frail or elderly people, and others with weakened immune systems. Although healthy individuals may suffer only short-term symptoms such as high fever, severe headache, stiffness, nausea, abdominal pain and diarrhea, Listeria infection can cause miscarriages and stillbirths among pregnant women.

So far, no cases have been reported. But that hasn’t stopped basic bitches across the country from freaking out about the fact that their beloved favorite snack could potentially kill them.

Sabra hummus is recalled WHAT AM I SUPPOSED TO DO WITH MY LIFE??

sabra recalled their hummus….do u know how much of their hummus i consumed last weekend………………..

But it seems that Twitter user @HiRezTheRapper is taking the news hardest of all. His tweet below, which has been deleted, was accompanied by a picture of a woman slung over a toilet.

This is the third listeria scare in recent months. Amy’s Kitchen, the brand known for heart-healthy frozen foods, and Blue Bell ice cream have also recalled products. In the latter instance, a number of people became seriously ill as a result of eating contaminated Blue Bell ice cream.

Stay strong, everyone. We’ll get through this dark snack time together.