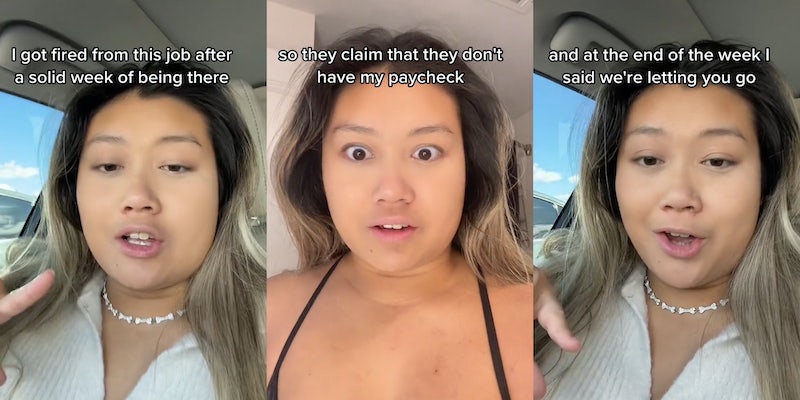 ‘I immediately was treated differently by the managers’: Bartender says she was wrongfully fired after a week—and never got her paycheck

'They claim they don't have my paycheck.'

A TikToker is calling out a former employer over what she says was wrongful termination when she was fired from her role as a bartender after a week on the job.

In a recent video, viewed more than 30,000 times, user @bluepastadog speaks out about being fired from her job and how she thinks her race and age played a factor in her employer’s decision. @bluepastadog didn’t reveal who she worked for but she did mention in the video’s caption that it was a corporation.

“In my opinion, they’re racist as fuck because I was the only Asian person in the entire restaurant … [and] every time someone talked to me they were always talking to me like I was stupid or talking down on me,” @bluepastadog said. “I immediately was treated differently by the managers when they found out how old I was.”

“So [age] and the race card has to be the only reason I got fired because I’ve never been fired from a job, and honestly I have worked a lot of jobs,” @bluepastadog said.

Race and age are among the top forms of workplace discrimination seen by the federal government’s Equal Employment Opportunity Commission. In Texas, proving wrongful termination can be difficult because of its at-will employment laws, which means employers may terminate an employee for any reason or even for no reason at all. But according to the Texas Workforce Commission, there are some exceptions such as federal and state discrimination laws.

@bluepastadog also said she hadn’t received a $200 paycheck from her former job.

“So they claim that they don’t have my paycheck,” she said. “They also claim that it was mailed to me three weeks ago, but it only takes about two days to get something in the mail like that”

She said she later called the establishment to complain about not receiving her money.

“Now that I am promoted to customer, I can bitch out whoever the fuck I want and it doesn’t matter,”she said.

Some commenters were quick to empathize with @bluepastadog over the issues she faced, arguing she should target the establishment legally.

“You cannot get fired without LEGIT reason,” one commenter said. “Race, age, etc is discrimination and can be turned into a lawsuit! Get ya money sis.”

To which @bluepastadog responded, “Thinking about it tbh.”