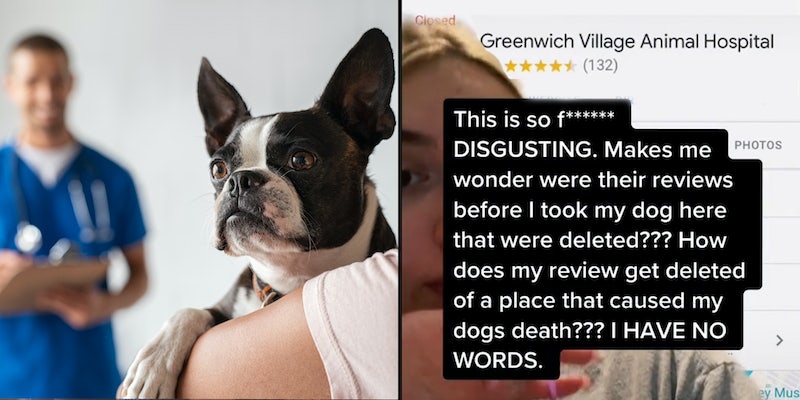 ‘How many bad reviews were deleted before I brought my dog here?’: TikToker says New York City vet is deleting bad Google reviews in viral TikTok

'This shows they're more concerned with their image than the quality of their services.'

A TikToker went viral after claiming that a New York veterinary clinic killed her dog through malpractice. Now, she’s saying the clinic is removing her negative reviews on Google.

“So my dog died, and Google removed my review of me leaving a bad review of the place that killed my dog,” Vianna says in the TikTok video.

In the three preceding videos, she laid out the exact details of what she alleges happened at Greenwich Village Animal Hospital.

To sum it all up, Vianna says she took her French Bulldog to Greenwich Village Animal Hospital to have BOAS/soft palate surgery performed. This surgery fixes a breathing issue that impacts many short-nosed breeds, like French Bulldogs and Pugs.

Greenwich Village Animal Hospital gave her a consultation and assured her that dogs were assessed and monitored during the whole procedure. The animal hospital also stated that they had several emergency procedures in place in case anything went wrong.

A week later, Vianna dropped off her dog for surgery. After a few hours, she called the hospital. A technician informed her that the surgery “went great,” a claim corroborated by a veterinarian in another phone call an hour later. Vianna was then told to pick up her dog at 5:30 PM.

When Vianna got to the pharmacy, the pharmacist informed her that her dog’s prescribed dosage, 1.25mg of dexamethasone, did not exist. After trying to call the surgeon to clarify, she was told that he was off for the weekend and that she could leave a voicemail.

Suddenly, her dog’s condition began to deteriorate. Frantic, she attempted to call Greenwich Village Animal Hospital multiple times before sending them an email out of desperation. Someone from the hospital replied, saying that they were working on resolving the pharmacy issue and that the dog probably just needed more painkillers.

Vianna did not accept this explanation and took her dog to an emergency animal hospital. After examining her dog, the veterinarian informed Vianna that her dog had been improperly intubated during the surgery and was not properly monitored and assessed during the surgery. This resulted in the dog having fluid in its lungs.

Despite the best efforts of the emergency veterinarian, Vianna’s dog passed away.

“I am furious,” she says in the final video. “This should have never happened.”

“Please do not ever go to this place, ever,” she later adds. “They killed my dog—something I will never get back.”

Vianna says that Tracy Sane, DVM, who was in charge of the procedure, has not personally reached out to her. Instead, someone at the hospital reached out to offer a reimbursement, which Vianna feels is insufficient.

All of these events led Vianna to post a negative review on Google. However, she says her review disappeared soon after posting. She claims that the hospital found a way to remove her review.

But is it possible for a business to delete negative Google reviews?

There is no direct way for businesses to delete Google reviews. However, a business can report a review for violating Google’s review standards. According to Cut Throat Marketing, a review can be deleted for numerous reasons ranging from “offensive content” to “conflict of interest.” Reporting a view for one of these reasons can result in the review being removed, following a check from Google.

Regardless of why Vianna’s Google review disappeared from Greenwich Village Animal Hospital’s page, users of TikTok have deep sympathy for her and her struggles with losing her dog.

“I am so so sorry dear,” wrote one commenter. “Listened to your story and as a dog mom who has dealt with a terrible vet or two in this city, my heart goes out to you.”

Additionally, many users say this will inform their future veterinary decisions.

“i live around here and will be spreading the word to not go to all my fellow dog parent neighbors,” shared a user.