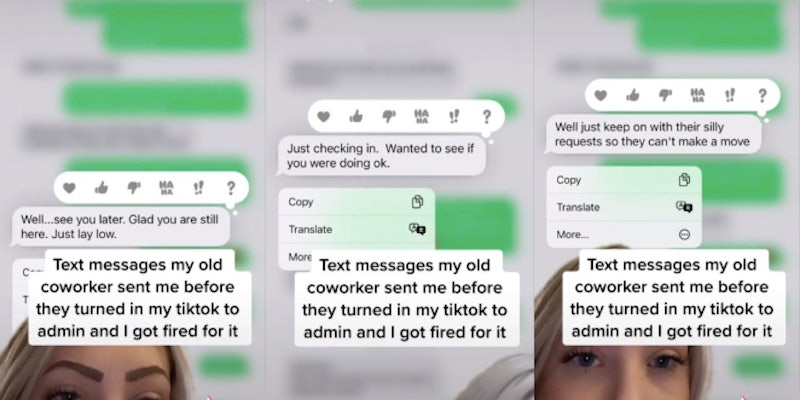 ‘There’s always one at most jobs that is a backstabbing wench’: Woman shares text messages co-worker sent her before getting her fired over a TikTok

'It’s always the ones that act like they wanna be a friend.'

A former school teaching assistant went viral on TikTok after they shared text messages a co-worker sent her before getting her fired over a TikTok.

The video features user Nicole Johnson (@nicoleybridget3) with the overlay text reading, “text messages my old coworker sent me before they turned in my TikTok to admin and I got fired for it.” She shows the screenshot messages from the alleged co-worker who appears to be trustworthy and supportive. The caption reads, “people wondering why I trusted my coworker… here’s how they used to text me just months before they turned me in.”

The video has been viewed over 391,000 times as of Wednesday. Viewers in the comments stressed how co-workers aren’t friends.

“Coworkers are NOT friends- it’s a hard lesson to learn!” one viewer emphasized.

“Never look to work for friendship. I keep work and life separate and my social media accounts are private,” another stated.

“Learned the same lesson. no matter how much they say they love you etc some ppl can’t be trusted at all. especially with social medias,” one viewer shared.

“I feel ya! Someone seen one of my tiktoks and sent it to my hr. People just have nothing else to do sometimes,” one person commented.

“That happened to me as well. It wasn’t text messages but she rearranged a conversation that I had with her. How low can people go?!?” a second user commented.

“Same thing happened to me. it was a witch hunt. They started looking for any reason to get me fired. I saved my dignity and quit,” another wrote.

The TikTok video that allegedly got Johnson fired was posted on May 14. The seven-second clip featured Johnson sipping her Starbucks coffee with the overlay text reading, “me telling my coworkers there is no way I can come in early cause I have kids but yet I arrive with a Starbucks daily.” Johnson worked as a special education paraprofessional, which is a trained aide who assists a professional person. In less than a week, Johnson was fired from her job with two weeks left of the school year.

According to a past Daily Dot article, Johnson has been reprimanded for TikToks before. In November 2021, Johnson was placed on administrative leave for three weeks for making “unprofessional TikToks” and for “harassment of a co-worker.” In a past TikTok video, Johnson explained how her co-worker turned her TikTok in after she knew Johnson was a “thin line.” Johnson told management that she’s been struggling with ADHD and being a single mother but ultimately was fired on May 14.