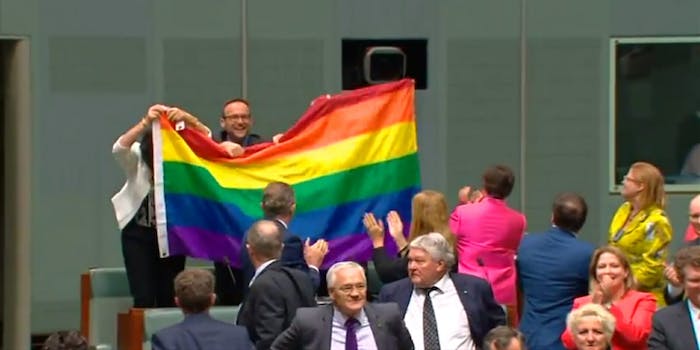 Australians joined in the celebration, hugging, singing, and crying.

After years of conservative pushback, the Australian Parliament legalized gay marriage on Thursday.

“This belongs to us all,” Prime Minister Malcolm Turnbull proudly said, the New York Times reports. “This is Australia: fair, diverse, loving, and filled with respect. For every one of us this is a great day.”

Australia has faced a long and sordid battle to legalizing gay marriage, as members of Parliament tried 22 times since 2004 to reverse a same-sex marriage ban. In November, a postal survey revealed that the majority of Australians support gay marriage, forcing Parliament’s hand to finally pass a same-sex marriage bill. And in a stunning act of bipartisan support, only four lawmakers voted against it.

The LGBTQ rights win was certainly was a cause for celebration on the House floor. After the bill officially passed, the entire chamber erupted in applause. Onlookers clapped from the gallery as politicians cried and hugged one another, with a huge rainbow flag behind them. Soon, the public joined in to sing “I Am Australian” by Bruce Woodley and Dobe Newton.

Of course, the vote quickly went viral, with many celebrating the response in the House.

Okay I am calling it a night. I'll leave this here. An Aboriginal Labor MP and a Qld Liberal MP hugging over the passage of a bill that grants marriage equality to the LGBTIQ community. Some days leave me more hopeful than others. #ssm #auspol #marriageequality pic.twitter.com/VkIxfLAJki

Today is a momentous day. #MarriageEquality has passed through Parliament, ensuring marriage equality for all.

We believe we can’t be a city for all people unless all people are treated equally. We’re glad everyone in our community is now free to marry the person they love. pic.twitter.com/WHlNYBVuBf

And some brought up that bigoted Australian couple who promised to divorce each other if gay marriage passed. Looks like they have some paperwork to file.

But others took the moment to point out that not every activist lived to see the vote. Some died fighting for the right to be who they are.

i need to pay my respects to the LGBTQI+ gens who faced the worst of the worst queer battles. we would not be here without those people, the 78ers, the LGBTQI+ elders who paved the way, the proud fearless queers who faced death by coming out. i am so thankful. #marriageequality

Australia may have legalized gay marriage, but the fight for LGBTQ equality rages on. Homophobia still remains rampant in the country, like when the Australia Post accidentally sent out an anti-LGBTQ flyer. As with most legal victories, the country’s culture still has to change before the entire nation can reach true equality for queer Australians.