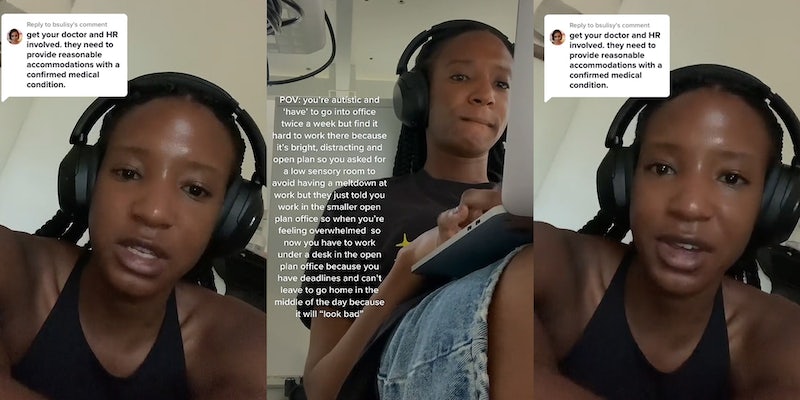 ‘POV: you’re autistic and ‘have’ to go into the office twice a week’: TikToker resorts to working under a desk after employer refused to provide proper accommodations for her disability

'If you've been through this you know how draining it is to constantly speak up for your needs.'

An autistic TikToker says that she has resorted to working under her desk after her employer wouldn’t provide her a low sensory room to work in the office.

Tyla Grant (@tylgrnt) posted a TikTok on August 2 showing her working under a desk in an office and explaining her circumstances. In the video’s overlay text, she writes that she is required to go into the office twice a week by her employer, but that it’s hard for her to work in the office environment because it’s “bright, distracting,” and an open floor plan.

Grant says that she asked for a “low sensory room to avoid having a meltdown at work,” but she was told to work in a smaller room—still with an open floor plan—instead. So, she says she has decided to work under her desk to accommodate deadlines and her employer’s requirement that she not work from home every day.

“Nothing to see here,” Grant captioned her video, which on Monday, had almost 285,000 views.

Nothing to see here

The London-based TikToker posted multiple follow-up videos responding to comments she got on her viral video. She says that it’s been “draining” to “constantly speak up for [her] needs” and that “legality and reality are two different things” when commenters mentioned U.K. laws—like the Equality Act of 2010—that mandate employers to make “reasonable adjustments” for workers who are at a “substantial disadvantage” because of their disability.

Grant also says that there aren’t separate spaces in the office, like phone booths, that she could use because those rooms are regularly used by others for their designated purpose. And, of course, that working under her desk wasn’t her “first choice.”

“Because I am so drained, I guess, preoccupied, made anxious by the setting and the environment, my work [is] subpar,” Grant says in a TikTok.

And to those who suggested that she bring in curtains to help with her situation, Grant says that she shouldn’t have to bring items into her office to work in it.

In a TikTok from August 5, Grant says that she’s emailed her manager a “list of reasonable adjustments,” which has been sent to human resources, who have told her that “they’re working on it.”

“But it’ll take forever and I’ll continue to be stressed, anxious, and eventually burnout,” Grant wrote in the TikTok’s overlay text. “But can’t take time off because I don’t want to ruin my routine because that will also make me spiral.”

Commenters on Grant’s video expressed their frustration with being asked to work in the office rather than working from home.

“Oh my god these are the exact words I’ve been looking for to describe this,” one user wrote.

“Left my manager job a few weeks ago for a lower paid junior role, fully remote,” another viewer, who identified themselves as having ADHD, commented. “Wish employers would see how much an environment can impact ppl.”

“I have to just walk around the office constantly because the lights, people, everything is just overstimulating and makes me feel sick,” another user wrote.

The Daily Dot has reached out to Grant via email for this story.