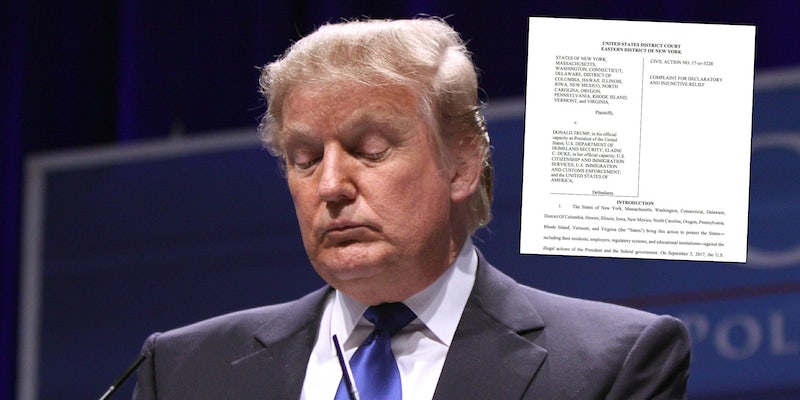 The decision to terminate DACA violates the Fifth Amendment, the suit argues.

A group of 16 attorneys general has sued President Donald Trump and other factions of the government to stop the administration’s plan to terminate the Deferred Action for Childhood Arrivals (DACA) program.

The lawsuit, filed in U.S. District Court in New York, argues that the decision to rescind DACA will “cause harm to hundreds of thousands” of people within the states that joined together in the suit.

The suit argues that the decision to terminate DACA violates the Fifth Amendment, specifically the equal protection clause by discriminating against DREAMers of Mexican origin and other DACA recipients.

“It’s clear that President Trump’s DACA repeal would cause huge economic harm to New York – and that it’s driven by President Trump’s personal anti-Mexican bias,” New York Attorney General Eric Schneiderman said in a statement. “Attorneys General have not hesitated to act to protect those we serve, and I’m committed to continuing to use every tool to protect New Yorkers.”

On Tuesday, U.S. Attorney General Jeff Sessions announced the Trump administration’s intention to end DACA, which shields young undocumented immigrants who entered the United States as children from deportation, calling it “unconstitutional.” The decision sparked condemnation and protests across the country.

However, the Supreme Court has not definitively ruled on the program, as it was deadlocked in a June 2016 case that challenged DACA.

With the Trump administration’s decision, the approximately 800,000 people already enrolled in the program will remain covered until their two-year permits expire. If their permits end before March 5, 2018, the six-month delay Sessions’ announced, they can reapply for another two years. The government is not accepting any new applications.

You can read the entire lawsuit here.