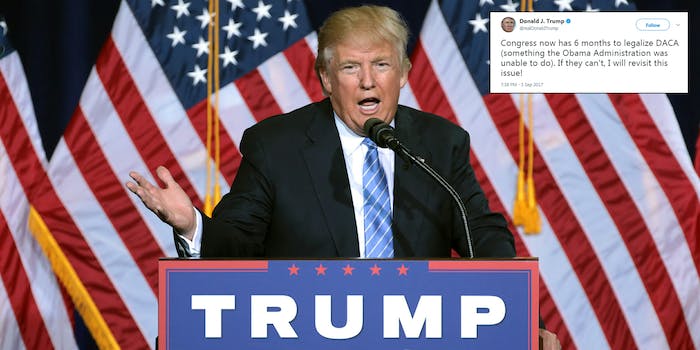 Will Trump have to go back on his word?

President Donald Trump said on Wednesday morning that he “will revisit” the Deferred Action for Childhood Arrivals (DACA) program, just hours after his administration announced that it would be terminated in six months.

“Congress now has 6 months to legalize DACA (something the Obama Administration was unable to do). If they can’t, I will revisit this issue!” Trump wrote on Twitter. Without congressional action, however, Trump would likely need to act unilaterally on a solution for DACA—the very move his administration says created the problem with the program.

Congress now has 6 months to legalize DACA (something the Obama Administration was unable to do). If they can't, I will revisit this issue!

The program shields young undocumented immigrants who entered the United States as children from deportation for two years after undergoing an application process. The decision to terminate the program was met with swift condemnation and protests.

With the administration’s announcement, it pushes the issue of immigration status for the roughly 800,000 recipients of DACA to Congress, where laws related to legalizing young immigrants brought to the country by their parents have toiled for nearly two decades.

Iterations of bills to help legalize these immigrants, known as “Dreamers,” have been pushed in both the Bush and Obama administrations without succeeding.

If Congress is unable to pass a bill regarding Dreamers, it might not be easy to “revisit” DACA, as Trump suggested in his tweet.

The Department of Homeland Security stopped accepting DACA applications on Tuesday and all DACA recipients who are set to expire after the six-month deadline are set to revert back to unauthorized status.

Attorney General Jeff Sessions called DACA “unconstitutional” during his announcement that the Trump administration was terminating the program, so if Trump were to “revisit” it by reinstalling the program, he would be propping up something his Justice Department does not seem to deem lawful.

“The policy was implemented unilaterally to great controversy and legal concern,” Sessions said. “The executive branch, through DACA, deliberately sought to achieve what the legislative branch specifically refused to authorize on multiple occasions. Such an open ended circumvention of immigration laws was an unconstitutional exercise of authority by the executive branch.”

By terminating DACA, hundreds of thousands of people are left in a state of limbo regarding their immigration status. Unless Congress can pass something they haven’t been able to pass in more than a decade, it’s hard to see clarity coming anytime soon.