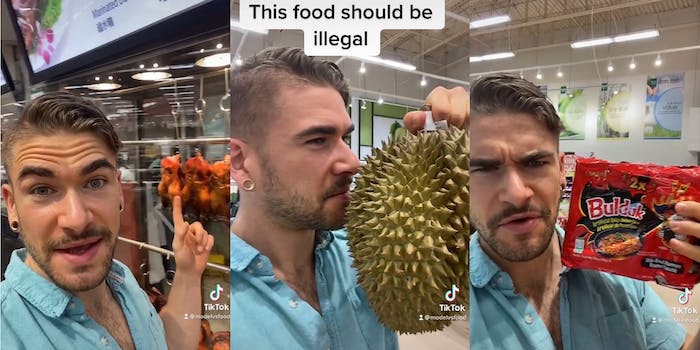 ‘During AAPI heritage month?’: TikToker called out for claiming Asian grocery store has ‘a pet store’

"Even if his intent wasn't to be racist, it still comes off that way."

A TikToker is under fire after comparing an Asian grocery store to a pet store and making other racist remarks in a now-deleted video.

The TikToker (@modelvsfood) shared a video making quips about a trip to an Asian grocery store. “If you’ve never been in an Asian grocery store, you’re about to be shocked,” he said in the beginning clip. Then, he showed a series of foods that he found inside the store while making faces and mock gagging.

“And, they even have a pet store back here, where you can grab whatever animals you want,” the TikToker said, showing the tanks where he had picked up a live crab in the store.

Although the TikTok video has since been deleted, another TikToker named Michael (@chachamyeonmikal) saved the video and stitched it with their own video calling out the other creator.

Michael says the deleted video was about three minutes long, but he had to stop watching after the comment about there being a pet store.

“Like you have to know how bad that sounds and how bad that looks,” Michael says in the video. “It’s a little bit racist.”

He also points out that the original video had been captioned with multiple hashtags, including #shocking, #ew, #gross, and #shockingfoodchallenge.

“And all of this during AAPI heritage month?” Michael asks. “During a period of time where anti-Asian hate crimes are at an all-time high because of racist connotations due to what Asian people eat—your video may go viral, but probably not for the reasons you wanted.”

In a second TikTok video, Michael shows another clip from the now-deleted video. In the clip, the original TikToker shows a small child pushing a mini grocery cart and says, “We have customers in training.”

Michael calls out the TikToker, saying it looks like neither the kid nor their parent knew they were being recorded for a TikTok.

“And during AAPI month, it comes off as racist to be treated this way,” Michael says in the video, referencing Asian American and Pacific Islander Heritage Month which is observed in the U.S. through the month of May. “He should know better. Even if his intent wasn’t to be racist, it still comes off that way.”

In response to the backlash, user @modelvsfood posted a six-minute apology video after deleting the original.

“No excuses. I am sorry. I cannot change the past, but I can change the future. I will do better. Thank you,” the video’s caption read.

In the video, the TikToker says, “I truly regret what was released, how it was released, and I really do take responsibility, and I sincerely apologize.”

The TikToker promises nothing like that will happen again on his page and continues to apologize throughout the video. He then recaps the video he had deleted, trying to explain the thought process behind some of the comments he made.

“I never spoke the words ‘weird’ [or] ‘gross,” he says in the apology video. “I just kinda wanted to show items that you normally can’t acquire in a North American grocery store.”

The TikToker adds that he is an “ally” to other cultures and has always tried to respect and appreciate different cultures. He claims that he’s always tried to promote acceptance and hopes that he can be forgiven for his video about the Asian grocery store.

For some viewers, the apology video wasn’t enough.

“Thanks for doing the bare minimum,” one viewer commented on the video.

Other users said the TikToker should apologize to the grocery store owner and workers.

“Go to the store and apologize,” one user said

“You need to go to that store and apologize to the workers,” another user wrote.

A third viewer commented, “You should definitely go to the store and apologize personally.”

The Daily Dot reached out to users @modelvsfood and @chachamyeonmikal via TikTok comments.