The owners of male-marketed companies tell us why they are determined to make gendered products.

There is no shortage of media outlets dragging companies for producing gendered products. We’ve covered many of them on Are Men OK?—laundry detergent, hair ties, novellas, soap,  coffee, shampoo (aka Manpoo)—all marketed under the idea that men need their own versions of everyday goods and services. And after studying these companies for a while, I wanted to finally answer the question: Why do men feel like they need them?

It’s not just that they are products for men—a group of people who are certainly not a monolith in their interests and tastes—but that they are products that tend to be marketed with similar aesthetics and copy. They come in dark colors and musky scents, packaged in ammo boxes or tough wooden crates. They evoke military or rugged lifestyles. They are not, as their ads frequently note, for women, or “metrosexuals,” or “vegans,” or anyone who doesn’t identify with the manliest of traditionally “masculine” traits.

Manpoo and “tactical” soap aren’t just about bringing a range of aesthetic options to the marketplace; they’re designed specifically for a group of men who revel in masculinity—men who are convinced alternatives to these products are not for them.

Leif Frey, founder of Frey laundry detergent for men, admitted to the Daily Dot that “men have every product under the sun made available to them (sometimes to an absurd extent).” But he was peeved that “the entire laundry industry seemed geared towards women.” He figured it was time for detergent to be a man-centered product too, so men aren’t stuck washing “all our clothing in a blue goo that hasn’t seen a formulation update in decades” and, most importantly, “is tailored towards the opposite sex.” 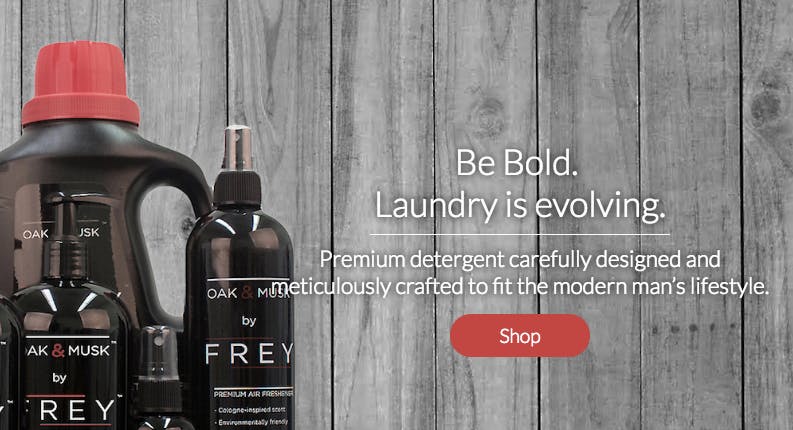 Evan Hafer, founder of Black Rifle Coffee, similarly started his company after feeling like there wasn’t a coffee brand for men like him. After serving in the Special Forces and working for the CIA, Hafer wanted to fulfill his dream of working with coffee, but found that he didn’t fit in at most cafes. “If I were in Portland or Seattle or anywhere else, I’d feel completely out of place. I can’t go to these coffee shops and talk about libertarian issues or pro-gun issues,” he told the Daily Dot. For him, most independent coffee shops, and even chains like Starbucks, appeal to a different type of man. “I wanted to create an appropriate venue for guys like us,” he said.

Both companies use self-deprecating copy, almost negging men into buying better products for themselves. In the first iteration of its site, Frey cheekily referred to how awful it was that men have to do laundry “using the same laundry detergent all their girl friends used.” When I brought this line up to Frey, he said it was a joke. “A guy sharing his girl friend’s hair products, lip balm, perfume, etc., is a funny thought. And when most of these laundry products are tailored towards women, we tried to make that analogy.”

Jokey intimidation is a tactic many of these companies use, but really their goal is quite serious. “Women have had quality body care figured out for a while,” Ryan Bodenheimer of Manpoo told the Daily Dot over email, but quality hair products isn’t something men have been told to want. “We want to change the way men think.”

Or, you could argue, they want to keep men thinking along the lines of gender essentialism. It’s something Hafer will readily admit to. “To get to the core of the issue, men are men and women are women. It’s not like one is superior to the other, they just are who they are,” he said. “One exudes masculine traits and one exudes feminine traits, and we have several hundred thousands of years of evolution to back that up.”

Hafer says he doesn’t have an issue with men who exude traditionally “feminine” traits, but that’s just not what he’s personally into, and he wanted to create a company where men didn’t have to be afraid of wanting quality coffee and loving all the things that go with traditional (and, let’s be real, heterosexual) masculinity, like guns and women in American flag bikinis.

Frey, on the other hand, claims his company is helping to undo traditional gender roles—by simultaneously adhering to them. “An outcome from generations passed and previous stereotypes, women are typically the ones who do the laundry in the household…and are therefore the primary purchases of laundry detergent,” he said. “So, of course, the industry gears its marketing towards the primary purchaser. Which perpetuates the stereotype that it is a chore for the woman of the house. And the cycle repeats.”

Frey hopes that by getting men excited about detergent, they will be amped to do laundry too—which is noble! But his branding methods include musky scents and dark colors and “for men” packaging, further demarcating gender lines and feeding stereotypes.

By proclaiming and redefining such gendered boundaries, what these entrepreneurs are more or less trying to do is to create a safe space for their interests—a place perhaps they crave because they too were fed macho stereotypes their whole lives. It’s easy to see where they’re coming from. Meticulousness over coffee exudes hipster, leftist vibes. The laundry industry is slow to reach out to men (though this is just as much a frustration of women as it is men). With their products, these companies are giving men permission to both accept their most masculine traits and re-label their “more feminine” ones as masculine. It’s OK, says the tactical lip balm, wanting soft lips is actually a manly thing.

Because the other option would be enjoying a trait or a product that’s traditionally feminine, and for many, unfortunately, that’s still unacceptable. It would strip them of their identity—an identity that has rarely been threatened since the dawn of Western civilization.

“I don’t feel society necessarily discriminates against me. What it does is say, ‘I don’t have a voice,’” Hafer says of America’s current attitude toward men. “I don’t have an opinion because we’ve been in charge of the country for 200 years or whatever.”

Hafer thinks that, in the coffee world and possibly beyond, he and his customers are the minority. “It might seem contrary, because we’re embracing masculinity, and to some people it might seem like you’re conforming to this traditional gender role. But not really, because there’s been a backlash against traditional gender roles in the United States, and it’s almost made masculinity, especially caucasian masculinity—we’ve been able to say we’re discriminated against to a certain degree.”

In an interview with NPR, Geena Davis discussed this skewed reality of what people believe are the majority and minority populations. “If there’s 17 percent women, the men in the group think it’s 50-50. And if there’s 33 percent women, the men perceive that as there being more women in the room than men,” she said about the findings of her Institute on Gender in Media.

That feeling can be summed up by the oft-quoted phrase: “When you’re accustomed to privilege, equality feels like oppression.”

Western society was built with men as its focal point, and this is still how much of the world operates, even if women, people of color, and other minorities have a slightly louder voice than they did a generation ago. Cars, medicine, air conditioning were all created with men top of mind. When we laugh at obvious and oblivious ploys like Bic for Her and pink hammers, it’s because they misunderstand the point: We don’t need products for women that are just regular things dyed pink. We need seat belts that fit different bodies, phones that fit different hands.

“I don’t feel society necessarily discriminates against me. What it does is say, ‘I don’t have a voice,’” Hafer says of America’s current attitude toward men.

But in a world where things designed for men are the default, anything actually gender-neutral, or even slightly feminine, starts to look uber-feminized. In a world where women have spent their whole lives making do with products that weren’t for them, men are suddenly surprised when the marketplace doesn’t cater to their specific needs.

And that’s where men like Hafer, bolstered by generations of privilege, are coming in and filling their personal voids.

“I wanted to market [Black Rifle Coffee] to what I felt was my subculture—dudes like me,” Hafer said.

Entrepreneurs like Hafer and Frey are socialized to see a hole in the market, not a hole in societal views of gender. Ignoring the latter is not something most women can afford, so women in the same position have been attempting to fill both, whether it’s by encouraging young women to enter STEM fields through their products, or helping other women launch products of their own.

All these ventures, whether they’re for men or women, feed into the capitalist promise that there is a product out there “for us.” That it won’t just make our clothes clean or make our hair shiny, but that it will be an outward representation of our inner selves. It will help us connect to our communities, tear down stereotypes, and allow us to build new worlds in our image. The difference is, the world already exists in men’s image. Wouldn’t it be nice if we could all find our safe space.