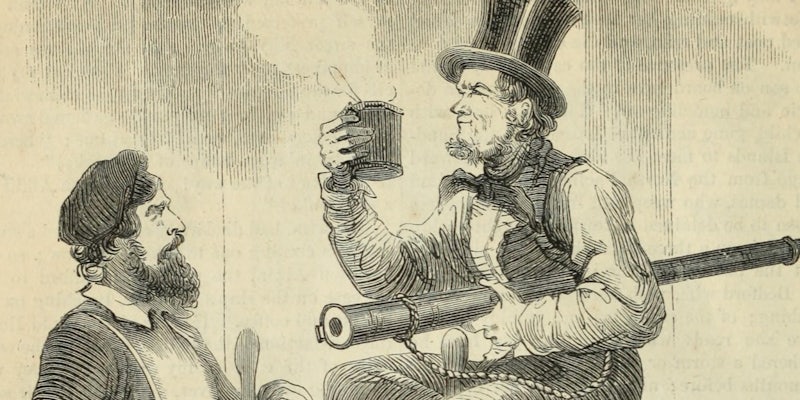 Black Rifle Coffee maybe needs to chill for a second.

In the 17th-century, coffeehouses were gaining popularity in London, both because of the drink itself and the notion that these were egalitarian spaces for rigorous debate and conversation between all classes of men. Women, however, were not allowed to participate, perhaps because men believed coffee had a secondary purpose as a pseudo-Viagra. In Men’s Answer to the Women’s Petition Against Coffee, it argues coffee makes “the erection more vigorous, the ejaculation more full, add[ing] a spiritual ascendency to the sperm.”

Fast-forward four centuries and that same spirit lives on in Black Rifle Coffee, “a premium small-batch, roast to order, veteran-owned coffee company.” From the outside, it looks like any other hipster roaster—beans roasted to order, impeccable branding, a Blue Apron-esque monthly delivery service—but a look at one of its ads (in collaboration with the film Range 15) tells a different story of manliness and virility and big, big muscles.

Guns? Check. Woman in a bikini? Check. Is her bikini in American flag colors? You betcha. Rant on the “pussification of the American male”? Yup. Kicking a racist caricature of an Islamic person in the head? That too. Joke about cops not arresting a white man because he “didn’t break the fucking law”? Eep. An entire taxidermied deer? For some reason, yes. And then finally, at the end, a bag of coffee.

The Daily Dot has heard back from Black Rifle Coffee about its ad and general marketing campaign, but the company also checks a lot of the boxes we see in many Are Men OK? companies. The coffee seems like a good quality product, and a certain percentage of proceeds go to charities benefiting veterans. The people behind it, of course, seem passionate about what they do. Plus, there are plenty of gun-inspired accessories, including K-Cups that come in an ammunition box.

On one hand, artisanal, small-batch coffee has become the territory of hipster types, and as such tends to alienate anyone who isn’t willing to buy into that fixie-riding, minimalist look. Why shouldn’t a man with a rifle collection and cargo shorts be able to enjoy well-made coffee on his own terms? On the other hand, it’s pretty rich to be shilling anything with such a strong aesthetic while simultaneously making fun of others just for adhering to a different one.

Judging from its ad, on some level, Black Rifle thinks they’re trying to be funny. It’d be easy for them to just chalk it up to “tongue in cheek” humor and accuse anyone who takes it too seriously of not being able to handle a joke—or worse, trying to disrespect the troops. But on another level, we know it’s very serious about using racist stereotypes and violence to sell quality coffee. Someone should tell Black Rifle about the “spiritual ascendency of the sperm.” Seems like it’d make a great followup ad.