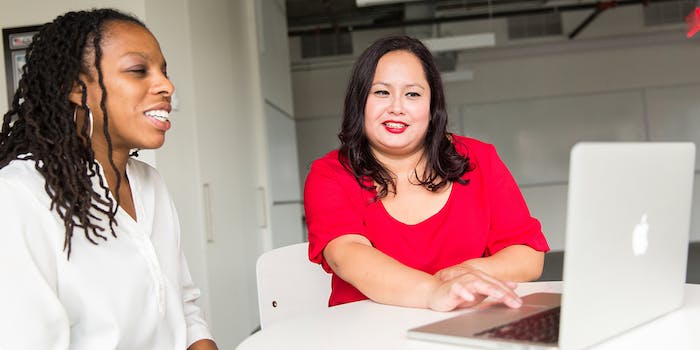 Women using the platform will access mentoring, events, and more.

Venture capital is an integral base of the startup economy, but less than 10 percent of venture capital-funded companies are run by women.

That’s part of why the crowdfunding platform Indiegogo is launching a new yearlong initiative to help women launch projects and businesses. The initiative kicks off on International Women’s Day with a coalition of partners that represent diversity in tech: Dell Women’s Entrepreneur Network, Girls In Tech UK, Girls in Tech US, Blooming Founders, Trep Life, and Lipstick & Politics.

Indiegogo co-founder Danae Ringelmann told the Daily Dot that while it’s hard to prove bias drives the data in venture capital funding, it’s clear that women have found much more success through crowdfunding than through traditional VC. In fact, according to a February University of California at Berkeley study that examined 9,000 Indiegogo campaigns, women are actually better at crowdfunding than men.

“It’s always hard to know if there’s a specific situation that didn’t pan out because of your gender,” Ringelmann said when asked about her own experience with funding. “What you don’t want to do as a woman or as a person of color is carry that suspicious filter with you all the time—because it can seem like a self-fulfilling prophecy—but you also don’t want to ignore that there are biases out there.”

While women-run companies only receive a tiny sliver of VC funding, the numbers on crowdfunding platforms are heartening—47 percent of fully funded campaigns on Indiegogo are run by women.

“It’s always hard to know if there’s a specific situation that didn’t pan out because of your gender.”

Ringelmann made it clear that her company is always in the process of learning from its own data, but so far she can say with certainty what drives a successful campaign.

“What we’ve found is that people who do better on Indiegogo are not the ones who focus the most on perks and profits, but allow more selfless motivations to manifest,” said Ringelmann. “People fund things for four different reasons: perks, people, passion, and participation.”

Women, Ringelmann suspected, may have a tendency to use more inclusive language when creating campaign materials and posting updates—and inclusive, participatory language has been proven to boost campaign success. A gangbusters crowdfunding campaign is made up of too many variables to pinpoint, but some of the women-run Indiegogo campaigns that set a high bar have raised millions. Jibo, a social robot for home use, raised $3.7 million on the platform; Axent Wear cat ear headphones used its $3.4 million campaign to get onto Brookstone shelves. Both companies are run by female inventors and entrepreneurs.

Ringelmann said the initiative’s specific programs will evolve between now and March 2017, but for now it definitely includes mentoring partnerships and a series of in-person events designed to boost networking and help launch new projects.

“Indiegogo has been a real game changer in early stage finance,” said Lu Li, founder and CEO of Blooming Founders, one of the initiative partners. “Now women get a fair chance and more access to investors— both men and women who, in contrary to established funding institutions, are willing to back a woman-led business idea.”