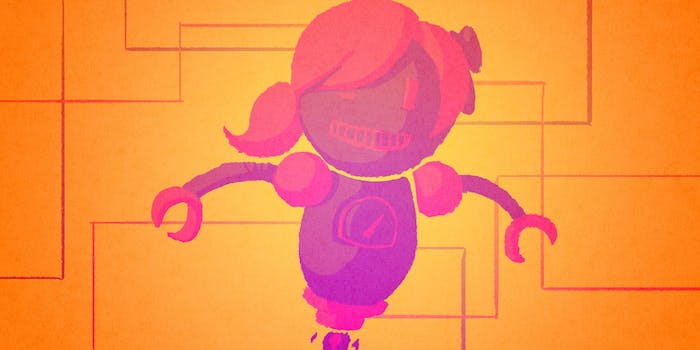 Do girls need a nail art robot to get interested in STEM?

Nailbot has big ambitions for girls and STEM.

“I definitely never dreamed growing up that I would be the inventor of a nail-painting robot,” explained Pree Walia, the inventor of Nailbot and the Preemadonna app, in a phone interview with Daily Dot.

Nailbot works like this: First, users paint their fingers with white nail polish. Next, they choose an image off the Preemadonna app and then place one finger at a time into a cradle on their Nailbot. In only five seconds, Nailbot prints a design on each fingernail using Hewlett-Packard thermal inkjet technology and ink that has been deemed safe for cosmetic use. All 10 nails can match or users can choose a different custom nail art design for each finger.

Walia’s machine has bigger ambitions than just giving its users an emoji manicure, however. Nailbot is one of a number of products introduced over the years to encourage girls to code, engineer, build, or master any other “maker” skills stereotypically associated with boys and men. Many of these products aim to do so with traditionally feminine messaging, whether through pink and purple color schemes or with a focus on beauty and fashion.

Walia created Nailbot seeking to combine both her personal and professional interests. After graduating from Northwestern University, where she studied history and gender studies, she worked on a number of political campaigns before earning an MBA and working for a lighting hardware company. “I loved hardware. It’s something tangible you’re selling,” she explained. “I got very into the control side in the business and I worked at another connected device startup, working on building smart thermostats and things.”

As for her personal passions, Walia loves beauty. She describes herself as a “girl’s girl” who loves heels and manicures and she came up with the idea for Nailbot while searching for a cheap manicure in Europe. “I thought it’d be great to have an automated way to paint your fingernail and your smartphone was the controller of that device to bring the price point down,” she explained.

According to the Nailbot’s Indiegogo campaign, the nail-painting robot is “not just a beauty device,” but rather “an innovative robot for fun, creativity and play.” Grownups can order a Maker Kit, which includes a buildable portable printer, so “girls will learn to program a graphical touch screen interface and how to print their own designs.”

Additionally, Nailbot is teaming with organizations like the Girl Scouts New Mexico Trails and MakerGirl to help girls code apps, build open source printers, and design their own digital art. All are skills that would prepare any girl for a career in STEM (science, technology, engineering and math), while still getting their nails done.

Nailbot is not the only new device aimed at getting girls interested in STEM. One is called Goldieblox, which aims to tap into “girls’ strong verbal skills” with building toys that come with stories about different characters. Another is Roominate, which are building toys in bright, pastel colors “for girls to build things as if they were design, electrical or structural engineers,” according the New York Times. Blink blink kits, which combine circuit-building with DIY fashion projects, are an example of the emerging STEAM (STEM plus art) field.  And of course there are also Lego Friends, a line of Lego characters marketed towards girls.

With the lack of women in STEM has been receiving increasing media attention, it’s understandable why inventors and toy makers have girls on the brain. An article about Goldieblox in The Atlantic cited a statistic that says 90 percent of America’s engineers are men. Many of these companies seek a more equal playing field in the future encouraging girls at a younger age to develop interest in building, science, and computers. “If we want more female engineers, we need to open their minds to engineering at a young age,” say the press materials from Goldieblox. Nailbot takes a similar stance on their Indiegogo page, explaining girls should not be “limited by one label.”

However, growing up, Walia admits she never felt discouraged from following any of her ambitions due to her gender. “I never felt like anything was necessarily off limits,” she said. Instead, the difficulties came in accepting—and getting others to accept—that she is both a CEO and inventor and a woman who enjoys hallmarks of traditional femininity. “I think growing up, one thing I wish I had been a little bit more accepting of is the idea that you can be all of these things. And it doesn’t diminish any of them,” Walia said. “I am not a contradiction.” Part of Nailbot’s mission is to remind girls of they can be girly-girls and interested in robots. 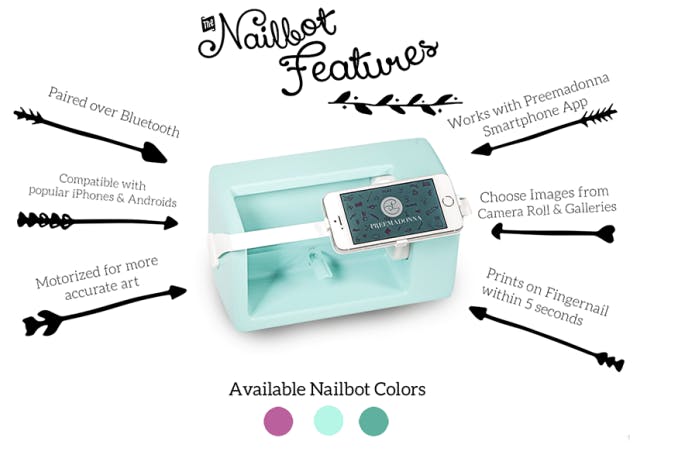 Statistics seem to confirm Walia’s experience that the difficulties in entering STEM come later for women. According to the National Girls Collaboration Project, girls and boys take high-level math and science courses at similar rates through high school, with similar success. It’s in higher education—closer to the time when students will actually be entering STEM careers—that we see the disparities. Women earn 50.4 percent of science and engineering bachelor’s degrees, but far fewer in computer science  (18.2 percent), engineering (19.2 percent), and physics (19.1 percent).

The split emerges when men and women actually enter the workforce. It’s then we see women tend to work more in the social sciences and less in engineering and computer science. Just 7.2 percent of mechanical engineers are women.

“Girls really want to help people and they care about nurturing,” Goldieblox founder Debbie Sterling told The Atlantic, arguing that if we teach girls that engineering is about solving problems and helping people, they’ll become more interested. The implication there, however, is that girls are verbal and creative, and somehow inherently not interested in STEM unless we make it appeal to those traits. It’s not hard to jump from that conclusion to the idea that women are just better suited to “soft sciences” (and perhaps should not bother with mechanical engineering at all).

Certainly there are girls who aren’t encouraged to engage in STEM-related fields from a young age, whose parents only buy them toys from the fairy-princess aisle of the toy store. For those kids, a product like Nailbot, which introduces robots in a “girly” way, could really be an inspiration to explore STEM topics. The fact remains, though, that the numbers show that young girls have no problem thriving in math and science. The problem is that something breaks down as they get older.

The Tumblr Everyday Sexism in STEM may illuminate part of the problem:  It’s not that girls don’t want to go into STEM, or that STEM isn’t “creative” enough for them—it’s that when they get there, they are treated like crap. The blog is populated with stories of male bosses, coworkers, and even students disrespecting women in their fields. In one, a professor with a PhD in mechanical engineering is laughed at by her male students when she said she used to work in a garage, because “girls don’t work in garages.” In another, a high schooler who loves to code and write is told by a male friend she should write instead of pursuing a major in computer science. There are men who say “you’re too pretty to be a science student,” or that girls are only in math programs to be eye-candy for the male students, or that their female colleagues should be home taking care of their children instead of teaching biology. No matter how much encouragement girls get to STEM while in middle school, they can get discouraged pretty quickly in a real-world environment. And younger girls—understandably not wanting to subject themselves to these toxic environments—may not even bother.

By the time a girl is old enough to be playing with a Nailbot, she’ll have already absorbed plenty of ideas about what it means to be a boy or a girl in our society. If she wants to paint her nails, that means she’s probably down with at least some aspects of traditional femininity—and plenty of parents want to send the message that that’s fine, too. At their best, devices like Nailbot just expand a child’s understanding of what femininity can look like. Like Walia said, being feminine and an inventor is not a contradiction.

In 2014, scientist Neil Degrasse Tyson spoke on a panel, which was asked if genetic differences could account for why there were so many more men than women in science. “I’ve never been a woman, but I have been black my whole life,” he said, and spoke about the similar social issues he faced as someone who wasn’t expected to go into science. “I got to see how the world around me reacted to these ambitions…and the fact that I wanted to be an astrophysicist and scientist was hands down the path of most resistance.” He made it because of his unrelenting drive, but not everyone has (or should have) that unwavering certainty of their future at such a young age.

It is important to tell girls that they can and should pursue their ambitions. But the issues come when products like Nailbot are presented as the solution to a singular problem, which may be what a marketing department requires but will not address the more complicated intricacies of structural sexism. Toys like Nailbot don’t teach boys to take girls seriously. They don’t teach male professors to stop hitting on their female students. They don’t teach companies to stop holding women back because they “don’t fit the culture.” Nor do they teach boys that if they want to play with a Nailbot, that’s perfectly acceptable, too.

If more girls fight their way into STEM and continue in these careers their whole lives, it stands to reason there will be more women in positions of hiring and influence. There will be more women to change the “boys only” culture and expectations. Fewer people will see careers as gender coded. For now, though, it’s not the girls that have to change. It’s everyone else that has to learn to accept them, painted nails or not. They are not contradictions.