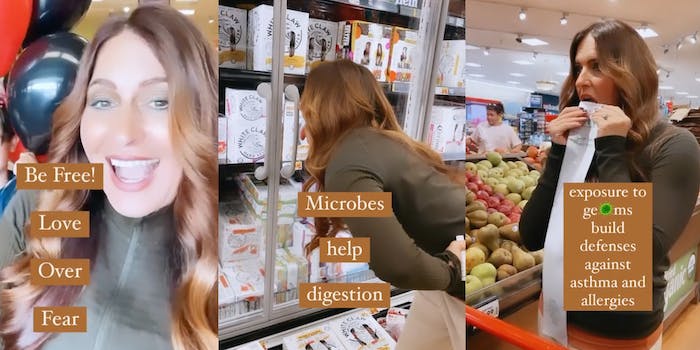 She told her viewers 'be free,' seemingly in reference to mask policies.

Anti-maskers are still taking a stand against any kind of COVID safety protocols whatsoever in the most bizarre ways.

Jodie Meschuk, a blogger who believes vaccines cause autism, filmed herself licking various items in the grocery store to post on social media for her like-minded followers.

The video starts out showing Meschuk and her young son walking into an unnamed store with the text “not law” superimposed over an image of the store’s mask policy.

She certainly isn’t the only person pictured maskless in the store, but she quickly sets herself apart from the others by licking produce bags, seemingly as her own son films her.

“Germs fortify your immune system,” Meschuk writes over the video. “Exposure to germs build defenses against asthma and allergies.”

And apparently she wants all the germs she can possibly find in the midst of a pandemic, as after licking the bags, she moves on to licking things that have seen far more touching from random people—namely, the freezer door in front of the White Claws and the handle of her cart.

“Be Free!” she captions the end of the video. “Love Over Fear.”

While the comments on her Instagram are supportive of her antics, viewers weren’t nearly as kind once the video reached the iamatotalpieceofshit subreddit.

“‘You know what a really sane and not crazy person would do in a super market? Lick the entire store,’” u/StrongIslandPiper mocked.

“There are literally people out there like this that film this shit thinking they’re doing the lords work and it’s hilarious,” wrote u/H2Joee. “Karma do be a bitch.”

Grocery stores haven’t been looking kindly on people pulling these sort of stunts while the threat of COVID-19 looms.

Last year, a California woman was actually arrested for licking jewelry at a store, putting it on, and filling her cart with $1800 worth of items — all of which could no longer be sold when she couldn’t pay for them herself, due to contamination.

Similarly, a man in Missouri was charged with making terroristic threats after licking deodorant at Walmart while mocking people afraid of COVID, and a New Jersey man was charged with the same after purposely coughing on a supermarket employee while claiming to be infected with the virus. A woman who coughed all over $35,000 worth of food at a Pennsylvania store was also arrested last March.