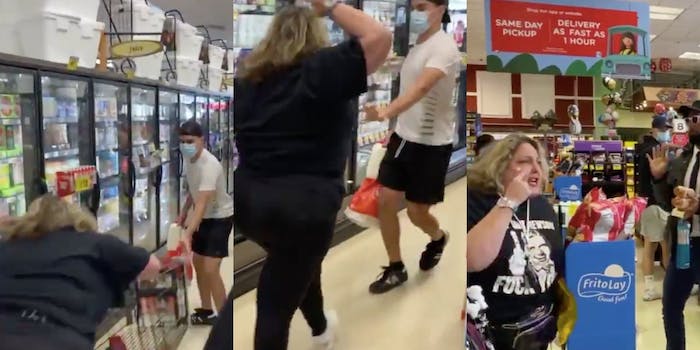 'Mask Nazi. There are Nazis here.'

2021 got off to a literally roaring start when a group of anti-maskers swarmed a Los Angeles mall and grocery store on Sunday and engaged in several verbal and physical altercations with other customers, many of which were captured in a series of viral videos.

Braslow’s thread begins with a video of a masked Ralphs customer telling an unmasked man, “Sir, you need to put your mask on. … I have a mask for you,” to which the unmasked man replies, “I don’t need that. I don’t wear masks.” Both men are flanked by several other unmasked protesters, who heckle the masked man unintelligibly.

The juiciest altercation, however, comes in Braslow’s second video. An unmasked woman pushes a shopping cart down a frozen food aisle in an attempt to hit a masked man. (The inciting incident is unclear.) The anti-masker steps out from behind the cart and pursues the masked man down the rest of the aisle, swatting at him and yelling, “He just assaulted me!”

Several other anti-maskers swarm the masked man and accuse him of hitting a woman, filming the altercation with their phones. The masked man begs the Ralphs security guard to call the police as the unmasked woman swats at him again.

“You hit a woman, bro,” a man offscreen says. The unmasked woman who rammed the customer with a cart calls him a “fucking pussy.”

In another video, a man with a mask pulled down around his chin says, “I tested negative [for COVID-19], so what are you worried about? Mask Nazi. There are Nazis here.”

After ravaging Ralphs, the anti-maskers stormed the Bloomingdales at Century City Mall, where they can be heard chanting, “No more masks!” One woman also rants about “the United States of fucking China.”

Braslow said the Los Angeles Police Department arrived at the mall but did not force the anti-maskers to leave. The protesters harassed employees and customers at several other stores, including Steve Madden, Ugg, and 85C Bakery Cafe.

A later video in Braslow’s thread shows a masked woman at the mall yelling at the protesters, “My father is in the hospital with COVID, you asshole!”

“A lot of people are,” responds the man who previously called a Ralphs customer a “mask Nazi.” “That’s life. People die. Your father’s not special.”

The LAPD did not have any update or comment on Sunday’s anti-mask protest at the time of this writing.

“Is this the kraken they were gonna unleash?” one user asked of the unmasked woman charging a Ralphs customer with a shopping cart, making a reference to the typo-filled lawsuit filed by President Donald Trump’s former attorney Sidney Powell.

“The kraken looked at that said ‘naw mate, I’m good.’ And slunk back in the briney deep,” another user responded.