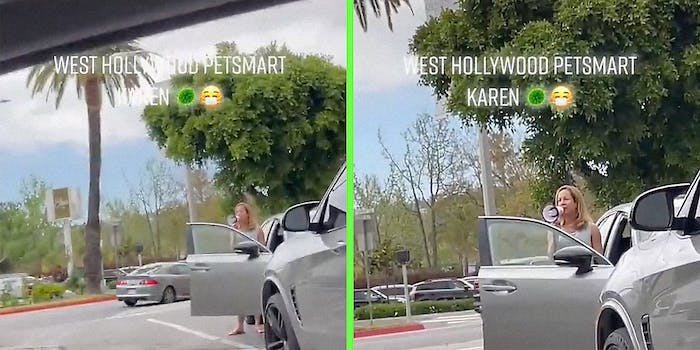 ‘Obviously you don’t care about your health’: ‘PetSmart Karen’ fat-shames customers with megaphone

A viral TikTok video shows a woman dubbed “PetSmart Karen” yelling through a megaphone and fat-shaming a woman in a parking lot in Southern California.

The video was first recorded and posted by Michael Steven Hinojosa (@freshfukka) as he watched the woman with a bullhorn in the PetSmart parking lot. Hinojosa says the woman is Shiva Bagheri, a dance studio owner and vocal supporter of former President Donald Trump.

“Why don’t you triple mask, lady, and why don’t you take every single one of those vaccines?” the so-called “PetSmart Karen” says. “Obviously you don’t care about your health. Look at you.”

Bagheri did not immediately respond to the Daily Dot’s request for comment.

A video posted to YouTube in October shows Bagheri at a pro-Trump rally. In the video, Bagheri says Breonna Taylor, who was killed by police in March 2020, was a “thug” and “criminal” and had a “dead body in one of her rental cars.”

A Black woman in the video states correctly that Taylor had no criminal record.

Another video shows Bagheri leading a “Beverly Hills Freedom Rally,” which she founded. In an interview, she pushes right-wing conspiracy theories and says Democrats are “destroying the Constitution.”

Following the video, Twitter users mocked “PetSmart Karen” for carrying a megaphone. “Obviously this is something she does on a regular basis,” one user wrote sarcastically, “because she is important and must be heard!”