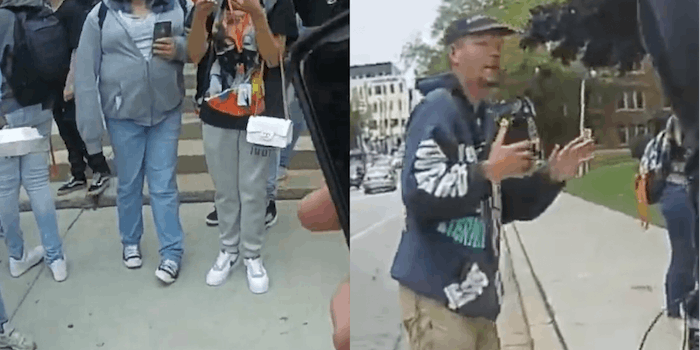 School staff are heard saying that they do not want the man there.

In a Reddit video posted to r/PublicFreakout on Friday, an anti-abortion protestor is seen arguing with high school students about abortion.

In the short 30-second clip, from the view of the protestor, a large group of students are seen responding to the protester. The incident occurred on Sept. 13, according to the time stamp on the video.

A student yells, “You gon’ make a baby raise another baby? You don’t think that’s sick,” she said.

As the protester continues to argue with the girl, two boys approach the man wanting to fight.

“You’re on camera sir,” the protester said to one of the boys.

The boys are heard counting down, “3, 2, 1..,” and then punching the protester, ultimately knocking him to the ground.

The full video was also posted to Reddit, which showed a different view of the incident. The woman who is recording the alternate video is heard talking to staff members of the school. She appears to be with the anti-abortion protester.

“If y’all doing it God’s way, that’s not God’s way,” the staffer said.

Soon after this exchange is when the two boys punch the protester, the woman runs over to the man checking to see if he’s okay.

The protestor was identified by FOX6 as preacher Nicholas Heald, who decided to hold his demonstration outside of Riverside University High School in Milwaukee, Wisconsin. the local outlet reports that Heald was holding up a “graphic” sign.