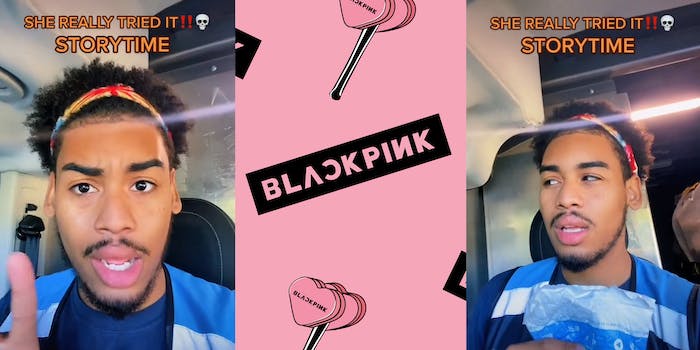 ‘YOU WANT ME TO TURN DOWN MY KPOP!!?’: Amazon driver says Karen called the music he was listening to ‘vulgar’

'Leave her packages at the bottom of her stairs.'

An Amazon driver came under fire in one New Jersey neighborhood for listening to K-pop, and the incident has gone viral on TikTok.

The “storytime” video was posted on June 11 and by Thursday had accumulated over 281,600 views.

In the video, the driver and TikToker @kinggtonio said he was listening to K-pop groups like Blackpink, Twice, and BTS on shuffle, while stopped on one of his delivery routes.

The TikToker, Tonio, explained there was a Sunday school event going on in the area. He then said that a woman came up to his truck and told him to turn his music down because there were children outside for recess and she didn’t want them “listening to this vulgar music.”

“I was like, ‘Ma’am, I hope you know I’m listening to K-pop right now.’ I was like, ‘This music is from a whole different country, this not even English,’” the TikToker said in his video.

The driver said in the video that his windows were cracked, and while his music was loud, it wasn’t enough to cause a distraction. He told the Daily Dot that his van was parked four or five houses away from the school area.

Tonio said in an interview with the Daily Dot that he was confused about why the woman was upset, but he found the situation amusing.

“It actually made my day. I was like, ‘You took your time out your day to come stop me?’ I just felt so appreciated,” he said in between giggles as he recalled the encounter.

He also said that while he’s only been delivering with Amazon for two months, he hasn’t experienced a music complaint like this one. He said the interaction almost felt targeted.

“Just to come over to and assume it was vulgar music was just saying something,” Tonio said in an interview with the Daily Dot. “It was like kind of a microaggression in my opinion. Like you just see, you know, a person my color blasting music in a van, you think he doing suspicious. I was like, ‘Girl, come on.’”

People in the comments also chimed in about the woman and her intentions.

“She didn’t even understand the words so WE know what that was really about. Leave her packages at the bottom of her stairs,” a user commented.

Another user explained a similar encounter, “I was listening to Jazz..Jazz and this white woman gonna ask me about the rap song I was listening too…they only sees us through the lens they create.”

Others came out in support of the music genre and the artists, while also expressing that children also listen to K-pop.

“And I bet them kids listen to the same music you was playing,” another added.

Tonio said despite the situation and the encounter, he will continue to jam to K-pop on future deliveries.