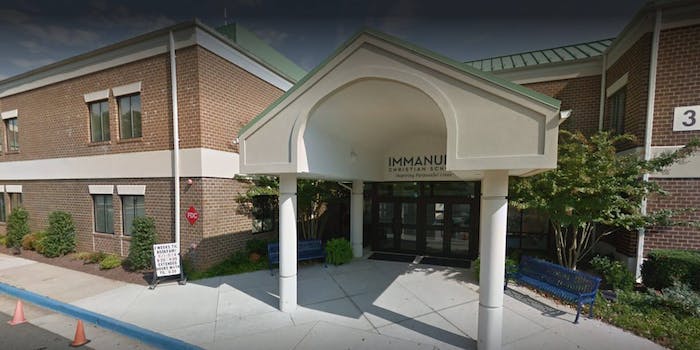 Her family issued a statement apologizing to the community.

A 12-year-old who accused three white boys of cutting her dreadlocks now says the claim was false.

Amari Allen, a middle school student at Immanuel Christian School in Springfield, Virginia, went viral after she appeared in a tearful video and said that three white boys pinned her down, covered her mouth, called her names, and cut off her dreadlocks. The video sparked the hashtag #JusticeForAmari, and public figures such as Rep. Rashida Tlaib (D-Mich.) and actor Patricia Arquette tweeted in support.

Allen has since retracted the allegations, according to a statement released by the school on Monday.

“We can now confirm that the student who accused three of her classmates of assault has acknowledged that the allegations were false,” said Stephen Danish, head of the school, in a statement provided to the Daily Dot.

Danish’s statement added: “This ordeal has revealed that we as a school family are not immune from the effects of deep racial wounds in our society.”

The Allen family issued an apology in the school’s statement.

“To those young boys and their parents, we sincerely apologize for the pain and anxiety these allegations have caused,” the family said. “To the administrators and families of Immanuel Christian School, we are sorry for the damage this incident has done to trust within the school family and the undue scorn it has brought to the school.”

The family apologized to the “broader community” for showing up with “such passionate support” and said they’re ready to face the consequences that will arise.

People on Twitter began responding as the news broke on Monday. Some people mocked Allen, and others said that given the current political climate, the story wasn’t hard to believe. Some users who supported Allen over the weekend called for her to be expelled from school.

I don’t think Amari Allen or her family should be taunted or bullied b/c that’s just a sh*tty thing to do. Her parents didn’t do the crime, she did. But I do think she should be expelled immediately. The boys would have been were it true. So, you know, Even Stevens.

So just seeing now that Amari Allen made false allegations against the 3 white boys at her school. First of all I'm glad it didn't happen to Amari. Teenagers/kids/people make mistakes and this was a big one. I am Sorry to her school for spreading false rumors.

Did her parents know? Were they part of it? Because if so, putting that and media attention on a minor is horrendous. The point to take away… It was EASY TO BELIEVE because it is the TRUE REALITY of what is happening across US.

Twitter user @escapedmatrix, a writer and activist, rallied relentlessly for Allen over the weekend. He expressed disappointment at the false accusations and said he’s grateful that the preteen didn’t actually suffer through the ordeal she described.

We had one hundred people with dreadlocks, Jamaicans and everything, ready to visit #ImmanuelChristianSchool to support Amari Allen. I'm extremely disappointed that she lied, but happy she was never assaulted.

I feel Amari Allen should be removed from the school, through expulsion or choice, just like Jussie Smollett was released from Empire. A lawsuit on behalf of the accused should be filed, and this coerced & confused young girl should be required to complete a racial justice class.