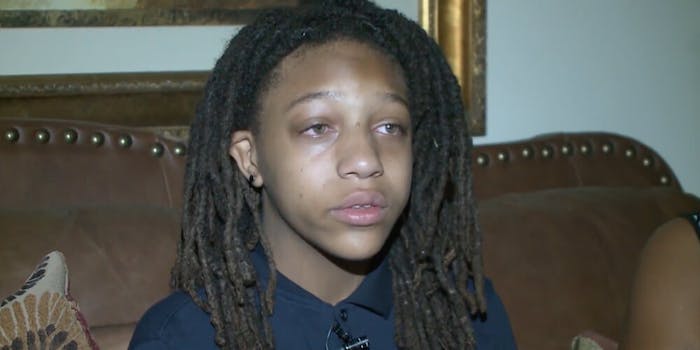 12-year-old girl says white classmates held her down, cut off her dreadlocks (updated)

It happened at the Christian private school Karen Pence teaches at.

Update 2:24pm CT, Sept. 30: Amari Allen has since recanted her allegation that her three white classmates forcibly cut off her dreadlocks at Immanuel Christian School, according to the Washington Post.

Amari Allen, a 12-year-old Black girl, says three white boys, who had been bullying her for weeks, held her down and cut off her dreadlocks at the Christian private school they all attend.

The attack occurred on the playground at Immanuel Christian School in Springfield, Virginia, where Vice President Mike Pence’s wife Karen Pence teaches at.

In a now-viral WUSA9 video, Allen recalls the attack.

“One of them put my hands behind my back, one of them covered my mouth,” she says. “[They said I was] ugly and I shouldn’t have been born.”

At one point during the attack, one of the boys brought out scissors. “They took big chunks of my hair and just cut,” Allen says.

Her grandmother, Cynthia Allen who is accompanying her in the video, questions where the teachers and other students were when the “heinous crime” took place.

Her grandmother says Allen wasn’t going to say anything out of fear, but she noticed Allen’s dreadlocks looked different and questioned her about it.

“We take seriously the emotional and physical well-being of all our students, and have a zero-tolerance policy for any kind of bullying or abuse. We are deeply disturbed by the allegations being made, and are in communication with the young lady and her family to gather information and provide whatever support we can,” Stephen Danish, head of Immanuel Christian School, said in the statement.

“All of the students involved in this matter have stepped away from school while the Fairfax County Policy Department conducts an investigation. We are cooperating with that investigation and further inquiries should be directed to FCPD,” Danish added.

This is assault, pure and simple. #justiceforAmari

In response, Twitter is calling out the school and seeking #JusticeForAmari.

Others are calling on the second lady to condemn the boys’ actions.

“@SecondLady this happened at your school. These boys intimidated and bullied this young girl—do the right thing and insist that their racist actions cannot be tolerated and should have consequences!” Twitter user @klz316 wrote.

.@SecondLady this happened at your school. These boys intimidated and bullied this young girl—do the right thing and insist that their racist actions cannot be tolerated and should have consequences! #ImmanuelChristianSchool https://t.co/AYjDWxdkb4

I just browsed the #justiceforAmari hashtag and found pretty much what I expected.

GOD DAMN IT WHITE PEOPLE, SPEAK THE FUCK UP!

do I have to repeat that? Oh, I saw a few presumably white people saying it was bad. But where is the OUTRAGE?
a) This little girl was assaulted and

And to ALL BLACK PEOPLE, AFRICAN-AMERICANS OR WHATEVER YOU IDENTIFY AS…ITS GONNA TAKE PEOPLE OF ALL RACES TO STOP THIS MADNESS! WE NEED WHITE, CAUCASIAN ALLIES! THAT'S FACTS! FUCK WHAT YOU ARE, IT'S ABOUT WHO YOU ARE! RIGHT OR WRONG! GET RIGHT OR GET LEFT! NO PUN INTENDED!

Public figures such as Rep. Rashida Tlaib (D-Mich.) and actress Patricia Arquette also called for justice. “I’m mortified she went through that. No one should touch her hair, her body. Any of it. That is scary and traumatic and a gross physical assault. It has very, very scary overtones. Her body, her self should always feel safe,” Arquette tweeted.

You are beautiful, Amari Allen. You are courageous & strong. You are loved.

You see, Amari, you may not feel it now, but you have a power that threatens their core. I can't wait to watch you use it and thrive.

I’m mortified she went through that. No one should touch her hair, her body. Any of it. That is scary and traumatic and a gross physical assault. It has very, very scary overtones. Her body, her self should always feel safe.

The school did not respond to the Daily Dot’s inquiries about whether the school offered racial sensitivity training to teachers and why middle school students had access to scissors while in an uncontrolled environment.