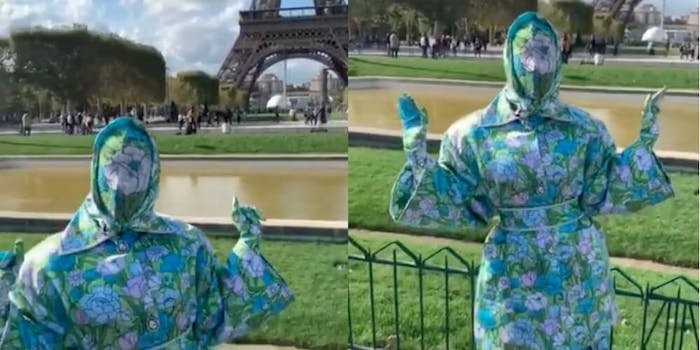 Wearing face coverings in public is illegal in France.

Cardi B debuted one of her Paris Fashion Week looks, and it is stirring some controversy on social media.

“Paris fashion week, I’m here!” Cardi tweeted, along with a video that shows the rapper in a floral bodysuit, covered from head to toe.

In the quick clip, Cardi struts through the streets of Paris (with the Eiffel Tower as her backdrop) and her face completely covered. Paparazzi excitedly snap photos as she is escorted across a busy street by her bodyguard. There’s only one big issue: It is illegal to cover your face in public in France.

Some Twitter users were upset by what appears to be a double standard for the rapper and Muslim women, who are currently banned from wearing face veils for religious reasons.

“Is anyone in France going to raise security concerns about Cardi B fully covering herself, or does that argument only apply to Muslim women in niqab?” one user questioned.

“So it’s illegal for Muslim women to wear the niqab in France, but when Cardi B dresses in a ‘head to toe’ outfit for Paris fashion week it’s celebrated? another asked.

So it’s illegal for Muslim women to wear the niqab in France, but when Cardi B dresses in a “head to toe” outfit for Paris fashion week it’s celebrated ?? Make it make sense https://t.co/2zH8WsK4Ks

Even Game of Thrones’ Nathalie Emmanuel wanted to remind people of the strict law.

“Gwaarrrn @iamcardib!! I hope this reminds people that Niqabs are banned in public places in France & come with a fine of up to €150,” Emmanuel tweeted.

Gwaarrrn @iamcardib!! I hope this reminds people that Niqabs are banned in public places in France & come with a fine of up to €150. https://t.co/SGlGRRVTnb

“Cardi B is wearing headscarf that is against the law in France… the law was created to restrict religious freedom of Muslim people in France,” Twitter user @d3sent wrote.

Cardi B is wearing headscarf that is against the law in France… the law was created to restrict religious freedom of Muslim people in France. #fashionstatement https://t.co/9dpf6ZgWXn

France became the first country to ban face coverings in 2011–including but not limited to burqas and niqabs–on the grounds that it prevents the full identification of a person and can pose a security risk, a move that was highly criticized as anti-Muslim. And while French officials argued that the law applied to all citizens, it didn’t seem like anyone took issue with Cardi’s outfit, which completely covered her face.

“It was very hypocritical for the French government to allow her to dress like that when a few years back when they announced the burqa ban they made Muslim women undress at the beach simply because they were wearing ‘too much clothes,'” Bayan (@_Falastinya_), one of the people who criticized the celebration of Cardi’s outfit on Twitter, told the Daily Dot via Twitter DM.

Bayan believes that if Cardi were a Muslim woman dressed similarly in France, there would be serious repercussions.

“She would get berated by the citizens and receive racial slurs as well as the French police forcing her to undress in the middle of the streets despite it being a part of her religious practice,” she said.

Back in 2012, two women were convicted and fined for wearing a niqab, leading to complaints being filed to the United Nations (U.N.) to investigate whether the law infringed on their rights. The U.N. committee, comprised of 18 independent experts from around the world, concluded that the French government had not properly explained how full veils pose a threat to public security. It also pointed out that face coverings are allowed in other contexts “such as sports” and “artistic settings.”

Cardi’s public appearance with her face covered, once again, calls into question the exact purpose of the face covering ban–and also whether it is truly equally enforced.