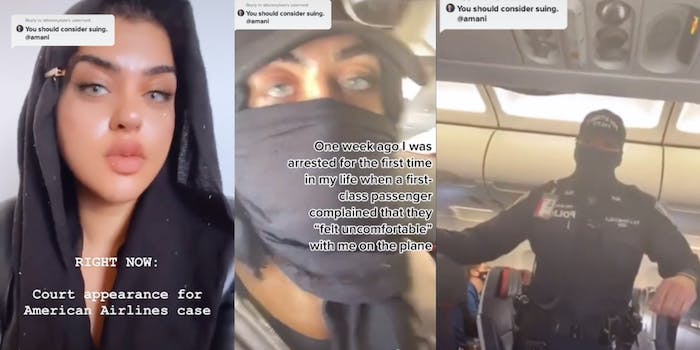 'American Airlines and the Port Authority, I'm suing your a**es.'

A Muslim organizer who was charged and arrested in November 2020 after being ordered off an American Airlines flight—in an incident the Daily Dot covered—revealed on social media that charges against her have been dismissed. She is now looking to sue over the incident.

Amani Al-Khatahtbeh, the founder of MuslimGirl and a former Congressional candidate, live-tweeted the Nov. 14, 2020 episode, in which she contends a first-class passenger on an American Airlines flight she was on had her kicked off because she made him “feel uncomfortable.”

The tweet includes two photos chronicling a letter appearing to be from an attorney retained by American Airlines in the case, and also includes her observation: “To this day, that passenger has faced 0 consequences.”

According to her tweets, a white man tried to cut her in the security line at Newark Liberty International Airport in Newark, New Jersey, that day. She said he rushed past as she removed her shoes and that a Transportation Security Administration officer told her to “cut it out” after she told the man to wait.

At the time, she alleged there was a double standard in operation, saying, “Y’all know if I, a VEILED MUSLIM WOMAN, had the audacity to throw a temper tantrum and run through TSA security, I would have gotten BODIED. I would have been detained, missed my flight, possibly gotten charged, etc.”

Later, on the plane, Al-Khatahtbeh maintained that she was told to leave the flight because the man in the incident saw she was on the plane and didn’t feel comfortable with her on the plane.

At the time, American Airlines made a statement that noted, “Our understanding is that Ms. Al-Khatahtbeh believed the other passenger, who is enrolled in PreCheck, was getting favorable treatment because he was allowed to proceed through security while she was removing her shoes.”

The statement went on to allege, “This led to a verbal altercation that continued through the terminal and on the plane where Ms. Al-Khatahtbeh confronted the passenger and began filming him before taking her seat.”

Al-Khatahtbeh also recently posted a TikTok video that further elaborates on her lawsuit plans. She also contends in the video that the letter she shared on Twitter was “privately” authored by the American Airlines lawyer “basically admitting they f*cked up and to drop the charges.”

Toward the end of the video highlighting her case, including audio presented as the judge’s dismissal, she says, “American Airlines and the Port Authority, I’m suing your asses.”

She then adds, “Lawyer up, assholes.”

The Daily Dot has reached out to American Airlines and Al-Khatahtbeh for comment.