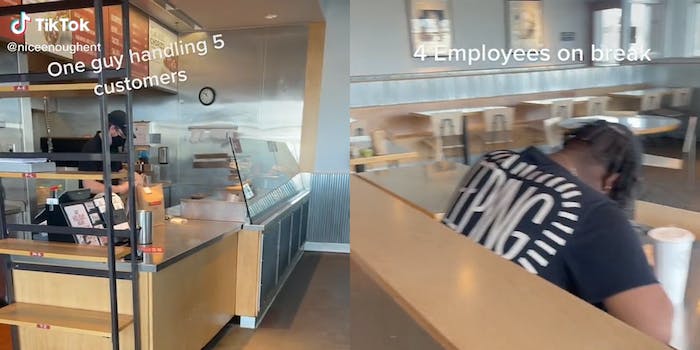 ‘Bad management. Someone didn’t properly schedule breaks for employees’: Viral TikTok of all but one Chipotle employee on break sparks debate

'Full staff takes a break while one guy does all the work.'

In a viral TikTok video, a Chipotle customer reveals that all employees but one were on break while five customers waited in line to be served.

“Full staff takes a break while one guy does all the work,” user @niceenoughent captioned the TikTok.

The video shows a single employee working behind the counter as customers wait. The TikToker then pans the camera to reveal four Chipotle employees on their breaks in the dining area.

With over 46,000 views, the TikTok received hundreds of comments debating the situation.

Many users criticized the management of that Chipotle location.

“If only the manager actually made a schedule that works and idk offered better pay, get more people on board,” one user said.

“Bad management. Someone didn’t properly schedule breaks for the employees,” another speculated.

“In some states you have to take your break no matter what. But [four] at the same time seems like bad scheduling,” a third said.

Others tried to understand where the manager was coming from when they put four employees on break at once.

“Give everyone a break at once, suffer for 30 mins. Instead of one at a time [and] suffer for 2 hours,” one user said.

“Till yall understand he’s the manager and gave his employees all a break during a slower time to make sure they were taken care of,” another suggested.

“Maybe the employees have been there all day and this is the only chance to get a break so the manager tries his hardest,” a third user said.

On the other hand, some users empathized with the lone Chipotle worker behind the counter.

“Clock in and help him,” one user said.

“I very much enjoy my breaks and they might [have] been having a shit day but I promise I’ll cut mine short if you need it like this dude,” another said.

However, a former Chipotle employee said if the employees on break were to help out, they wouldn’t be given more break time to make up for it. “I worked at chipotle before.. our breaks were scheduled we didn’t choose our breaks and if we did help out they didn’t give us extra time,” they said.

The Daily Dot reached out to @niceenoughent via TikTok comment and Chipotle via email.