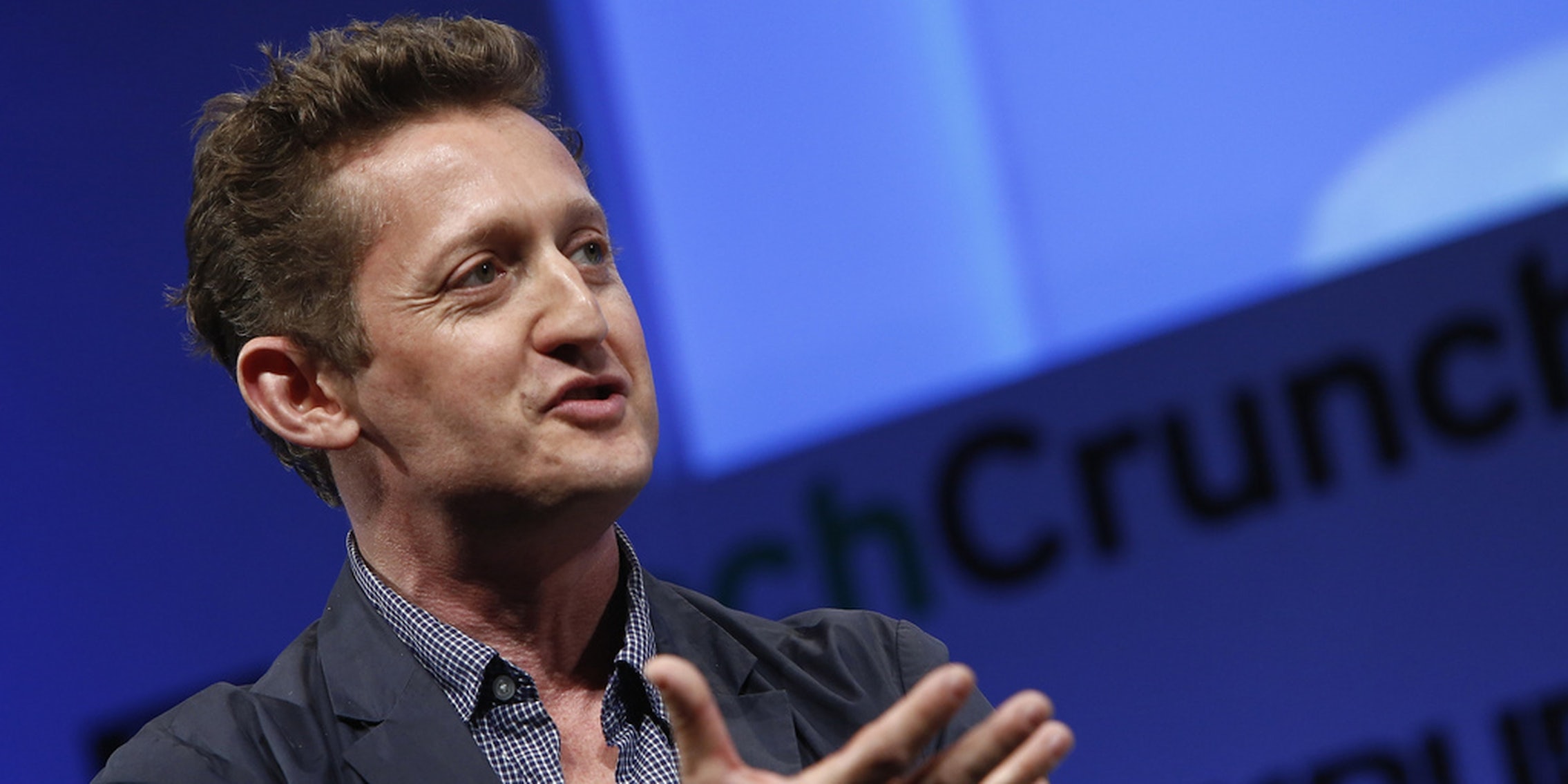 Winter, who starred in the popular Bill and Ted franchise and made a successful documentary about Napster, takes on the Deep Web in a new film.

First known to the world as Bill S. Preston, Esq. in Bill and Ted’s Excellent Adventure, Alex Winter quietly matured into a documentary filmmaker obsessed with how quasi-legal Internet activity can bring people together. His first documentary, Downloaded, chronicled Napster’s rise as a worldwide music-sharing site and fall in a swarm of lawsuits.

Now Winter is trying to raise $75,000 on Kickstarter for his followup film. Titled Deep Web: The Untold Story of Bitcoin and The Silk Road, it looks at the mysterious rise of Bitcoin, its future, and its role in online black markets.

We talked to him about his vision for the film and his inspiration to dive into the murky waters of the Deep Web, which Winter describes as a “new Internet.”

How much do you focus on the Silk Road seizure?

It’s not really a Silk Road doc; it’s really about the Deep Web, Bitcoin, the black markets, kinda the whole gamut of what’s going on. The age of encryption we’re living in, and the implications of that. I started looking into this when I started looking at the Napster story, in 2009. It’s interesting to me because it evolves out of the Napster era of peer-to-peer technology.

It sort of had the capability to be the next big disruption since Napster. So I started following it, and began to see how Tor was taking off and how people were using Tor, and then it was sort of like Reese’s peanut butter cups, you know: You got your chocolate in my peanut butter, you got your peanut butter in my chocolate.

Once people started connecting Tor and Bitcoin, then everything was off to the races. A whole ton of stuff started happening, both in the sort of mainstream legitimate sector, and obviously in the black market and the rise of the silk road. In my mind, the only thing that makes [the Silk Road] significant or new is that it was very effectively marrying Tor with Bitcoin. Because there have been black markets on the Internet as long as there’s been an Internet.

It’s funny, because to me, that’s a complete misrepresentation. The black markets are an extremely small sliver of what’s going on. In many ways, it’s kind of what I call shiny object syndrome. It’s sexier to talk about drugs than it is to talk about what the Deep Web’s primarily used for, like for governments to move encrypted communication around, or by journalists; it’s one of the most substantial areas of free press left in the world. It’s used by dissidents where they have no other means of communication under authoritarian regimes.

To me, that’s a lot more culturally significant than being able to buy my weed via the Web.

That’s something I covered extensively in the Napster movie; I felt like the messaging around Napster was misrepresentative of what’s going on of cultural significance. Everybody was focused on the idea of piracy and music file sharing, and not at all on the rise of this massive global community which had never existed before.

How do you make a narrative out of such a big subject, especially if you are shying away from the shiny objects?

There’s a story here in the larger evolution of the world we live in online. I did this with Downloaded, which focused on this one company having vast implications.

That’s why it’s called Deep Web. I’m focusing on the origin of the Deep Web, the architects of it, which led to peer to peer cryptocurrency like Bitcoin, which invariably led to uses like the black market. I’m talking to the core people involved in these areas, which sheds a really good contextual light on the whole story.

Now, I can’t claim to be able to fully tell something that’s quite so vast. That’s a miniseries, or the subject of a book. For me as a documentarian trying to do this, it’s all about paring away the information so that the viewer is hopefully left hungry enough to investigate more deeply, but with a much better understanding and not a black and white, but a more grey understanding of the issues. I did that with downloaded; I had to leave out an enormous amount of information. it wasn’t a microscopic investigation of the company; that’s better left for books. It’s meant to give a very specific context to what i saw as the significant implications of Napster.

Bitcoin seems constantly in flux. How do you characterize something that seems to change so rapidly in a film?

I think that what’s going on with Bitcoin is really similar to what went on with Napster: There are a million different perspectives on what it is. Even when I made the movie, it was funny to me because, 11 years after the fact, people are still arguing over what Napster was. Everyone has a very heartfelt, vehement idea about what it means.

I think Bitcoin is very much the same way. If you talk to people about Bitcoin, everyone says it’s this, it’s that. It’s a fad; it’s completely meaningless; no, it’s going to change the world, it’s super disruptive; it’s going to be gone within a week; it’s basically an investment; it’s a scam. It’s all really heated opinions. 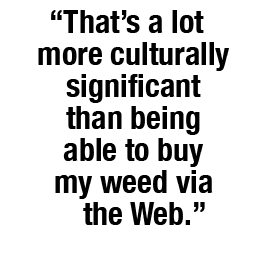 In my view there is a cultural significance to what’s happening, with why we have Bitcoin in the first place, which almost stands apart from whether it matters, whether it comes or goes. I have strong feelings for Napster and I think it matters that it was crushed, but culturally, its significance was felt whether or not it survived. So, sure, part of making this movie that’s totally bananas for us is we’re on a rollercoaster that’s moving 100 miles an hour, and the goalposts are changing every five seconds—when I started working on it, Bitcoin was worth like $1.50.

But the fact is its cultural significance, what it means, that’s not gonna change. That’s written in stone. Whatever the Chinese or the French or whoever wants to do with it—we’re not making “How Bitcoin Took Over the World” or “Is Ross Ulbricht the True Dread Pirate Roberts?” It’s leaving those micro stories to other people. I’m telling a macro story.

What is its cultural significance?

I’d love to leave that to the movie. I really don’t want to sound like a pretentious ass, but I hope that people take something from my movie that’s different from my thesis. I hope I’m not so dogmatic that all you walk away with is my one-line point of view on all this stuff, because I felt the same way about Napster. I had people completely disagree with me. That’s great, that’s what I want. But I’d love to leave it to the film, because I’m really trying to weave it into the heart of the movie.

I don’t want to give away who we’re talking to, but we’re talking to all the core architects. There aren’t that many of them; the people who built this thing are specific, and the people that know about it are significant. You can probably put two and two together yourself.

I didn’t really throw a net that wide; I threw a narrow, specific net so people that knew what they were talking about. There’s also prominent critics who think [Bitcoin]’s a complete and utter joke. A lot of people think it’s just a ponzi scheme. They may not even view themselves as prominent critics, that’s the funny thing.

Did you figure out who Satoshi [Nakamoto, the mysterious creator of Bitcoin] is?

That would be a coup. I have a sneaking suspicion I know why they are, and I’m tipping my hand by even using the plural. There’s something significant about the anonymity in which a lot of this architecture has been created. Though it does also lend itself to a lot of paranoia, a lot of the news around the Silk Road is filled with misinformation and just complete conjecture, and i’m trying to unwind some of that.

I think this whole way of trying to connect Ulbricht and the Silk Road and Bitcoin and the Deep Web and Satoshi, together in one neat little bundle, is dangerous and horribly inaccurate. Like Napster, you end up creating such a destructive mythos around something that’s not inherently bad, meaning the Deep Web or Bitcoin, and also what little we know about the Silk Road at this point, frankly.

These are attempts to to be made black and white that aren’t black and white. The more we can examine the grey, the more productive it is moving forward.