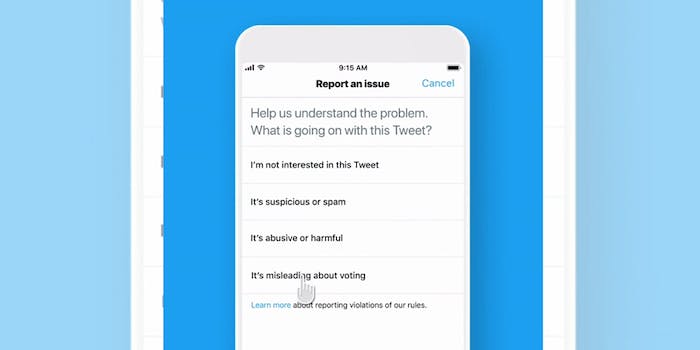 The site has been dealing with the spread of misinformation.

Twitter announced on Wednesday that it launched a new tool for users to report misleading election information.

The tool is being rolled out in India, where a general election is occurring, and Europe ahead of its parliamentary elections next month. The social media giant said it would expand the tool into other countries “throughout the rest of the year.”

“Today, we are further expanding our enforcement capabilities in this area by creating a dedicated reporting feature within the product to allow users to more easily report this content to us,” the company wrote in a blog post.

Users can now click on a new drop-down button when reporting a tweet that says it was “misleading about voting.” It also allows for users to add comments about the tweet before reporting it to Twitter.

The feature only is focused on tweets that are misleading about voting, and not other misinformation that has swirled on the platform during campaigns and elections.

In the lead up to the 2018 midterm elections, the company deleted 10,000 accounts that tried to deter voters from heading to the polls.