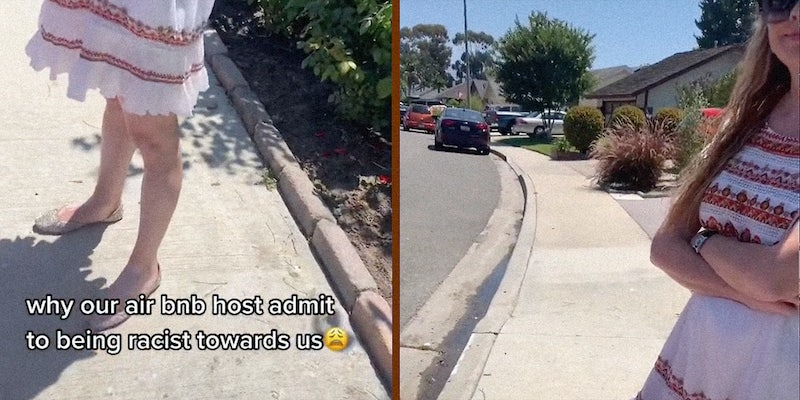 TikToker films Airbnb host admitting to being racist toward guests

'We felt VERY uncomfortable staying here and felt like our safety was threatened.'

In a viral TikTok video, an Airbnb property manager admits to a group of women that she and the owner are being racist and prejudiced toward them.

“I suspect that you guys are, like, I don’t know, racially prejudiced, or racist, or something,” the TikToker who posted the video, @herheadbigaf, says to the property manager in the clip. The property manager can be heard answering, “Yes, yes.”

‘We felt VERY uncomfortable staying here and felt like our safety was threatened,” the TikToker captioned the video, tagging Airbnb.

The video garnered over 300,000 views since being posted on Tuesday.

In a followup video, @herheadbigaf details what allegedly happened off-camera. The TikToker says she asked the property manager again if she was racist, and the woman replied, “No.”

“When I stepped to her and said, ‘You are,’ she was like, ‘No.’ And then she basically said like you guys damaged the Airbnb,” @herheadbigaf says. The TikToker says she knew this complaint might come up, so they took a video of the home after their stay.

“She then said that the reason she told Ata [the homeowner] that we assaulted her is because it was five of us around her when she was talking to us—basically saying like she was intimidated by us,” the TikToker says.

The TikToker told the Daily Dot that Airbnb removed the homeowner’s account from the website, as the company reportedly found she violated Airbnb’s community standards. She also said that Airbnb will be investigating the incident further.

The Daily Dot has reached out to Airbnb.