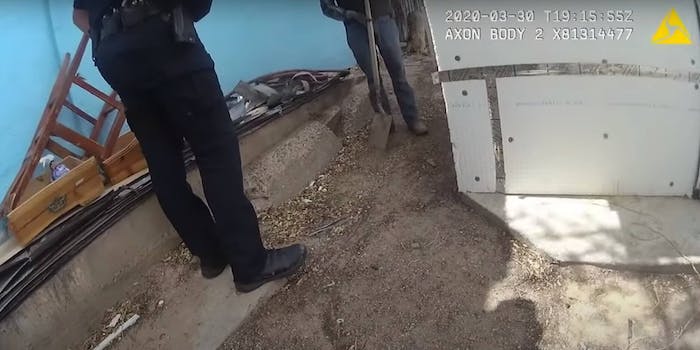 His daughter called police to perform a welfare check on him.

A man holding a shovel was shot in his home during a welfare check gone wrong in March. Now, police released bodycam footage of the incident.

Valente Acosta-Bustillos’ daughter requested a welfare check for her 52-year-old father after not being able to reach him, the Albuquerque Journal reported on Wednesday.

On March 30, two officers from the Albuquerque Police Department arrived at his home, where he was doing yard work with a shovel. The video, which was shared by the Albuquerque Journal, shows Acosta-Bustillos and the officers engaging in what appeared to be a calm conversation in Spanish. The officers discovered he had an outstanding warrant for his arrest upon running a search, according to BuzzFeed News.

“Felony. Yep felony. There’s no choice,” one officer is heard telling the other after finding out.

Acosta-Bustillos had been previously charged with aggravated assault with a deadly weapon, according to BuzzFeed News. He ran into his home as officers went to arrest him.

They followed Acosta-Bustillos inside his home, and Officer Joseph Bush tased him after he didn’t drop the shovel upon being asked to do so, according to BuzzFeed News.

“Put it down now!” one of the officers is heard yelling before shouting twice: “Back up! Put it down or you’re going to be tased.”

Officer Edgar Sandoval then shot Acosta-Bustillos a few times after the taser failed to capacitate him. Acosta-Bustillos managed to make it to his bathroom, used a chair as a barricade, and laid crying on the floor for minutes, according to BuzzFeed News. He was later taken to the hospital, where he was pronounced dead.

The department was sued by the Justice Department during the Obama era for a pattern of excessive force, according to BuzzFeed News. APD Lieutenant Scott Norris acknowledged in a press conference that Acosta-Bustillos didn’t appear violent in the footage and said its investigation will look into whether the officers should have called for backup to get Acosta-Bustillos out of the house. Attorney Mark Caruso is planning to sue Sandoval and the department, according to multiple reports.