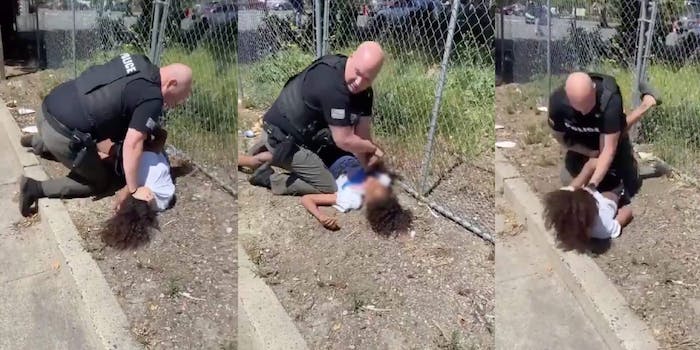 The altercation allegedly started over a Swisher Sweet.

A white police officer is seen on a cellphone video punching and slapping the back of the head of a 14-year-old boy during an arrest in Rancho Cordova, California.

The video shows the officer twist the boy, who is lying on the ground on his back, and flip him so his face is on the ground. He then punches the back of his neck to the ground, while holding one of his arms in a twist.

As the boy turns around and lies on the ground while putting his arms up, the officer punches him in the chest a few times. The officer then flips the boy and presses his face on the sidewalk before the video ends.

From behind the camera, someone is heard saying, “Stop bro! Stop!” repeatedly. “Stop hitting him bro!”

Another Twitter user claiming to be a friend of the boy’s mother also shared the video and said it was “over a swisher sweet,” which is a brand of cigar commonly used for smoking marijuana.

“The officer had no reason to brutalize and traumatize this boy like this!” the user wrote.

According to posts by family members, the boy has a heart condition.

Kavanagh said in a tweet that while he was caught with a Swisher Sweet, he did not “have marijuana on him.”

Neither the boy’s sister nor his mother’s friend responded to the Daily Dot’s requests for comment.

According to their follow-up tweets, the teen was charged with “resisting arrest” but was eventually let go.

The Daily Dot has reached out to Rancho Cordova Police Department for comment.

Meanwhile, people shared their anger over the incident with #JUSTICE4JAH.

Despite the violent video, some tried to defend the officer’s behavior in the comments. They asked why the boy would have a Swisher Sweet and why he was resisting arrest or claimed that the 15-second clip doesn’t give a full picture. One user said the video speaks for itself.

“This was really hard to watch i dont care what he did,” the user wrote. “He didn’t deserve that.”

Editor’s note: This article has been updated to clarify the origin of the quote, “The officer had no reason to brutalize and traumatize this boy like this!”