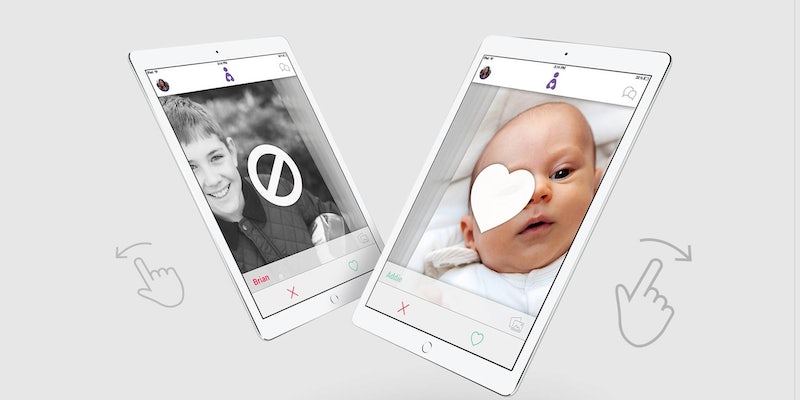 This app wants to be Tinder for adoption

Would you swipe right for the kid you'd like to adopt?

Adoption is a difficult process, full of paperwork, waiting periods, and research about the ethics of the process. That’s especially true when considering the challenges of things like transracial adoption.

Adoptly argues that adoption is a “slow, outdated process,” which it can bring to the speed of modern life by basically making it work more like Tinder. In Adoptly’s ad, which has the cadence of a Saturday Night Live digital short, the company shows prospective parents excitedly setting up a profile and swiping right on potential children—and left on a child named Brian. (Sorry, Brian, no parents for you today.) On the other side of the swipes are adoption agencies and foster parents, helping expedite the adoption process.

“Adoptly acts like an aggregator of agencies and networks, making the adoption process much simpler, faster, and more unified for prospective parents,” Adoptly’s Alex Nawrocki told the Daily Dot over email. “So in that sense it could be thought of like a search engine for adoptable kids.”

Just because you match doesn’t mean the kid is yours. “Parents will still have to go through the same review process, protocols, and requirements as anyone interested in adopting.”

Adoptly’s  recently launched Kickstarter says the app guides you through government-mandated background checks, reminding users of the seriousness of the process. But the Kickstarter later say the app would let you “forget about all the bureaucratic stuff and focus on what really matters – welcoming home the perfect new addition to your family.” It has currently raised $366 of its $150,000 goal.

Though Adoptly insists it’s not “Tinder-izing” or “gamifying” the adoption system, it seems a swiping adoption app would involve a lot of the same issues of app-based dating. Tinder has a notorious race problem, and it’s not hard to imagine that some agencies would choose white, married parents over parents of color, single parents, or LGBT parents, even if that choice is unconscious. Prospective parents may be making the same choices as well, and scales would be tipped in favor of agencies and parents who knew how to write a great profile and photograph well.

Adoption has these issues without apps, and prospective parents can already search for children with the same criteria they’d put into Adoptly. “It would be amazing if someday we could do ‘blind’ adoptions, but providing options for selective adopters seems like it will always be a part of the adoption process,” Nawrocki said. “We’re trying to upgrade an outdated, slow system and usher in new era of adoption practices. We hope Adoptly is the answer.”

It’s not Adoptly’s responsibility to solve the complicated issues of adoption. But it remains to be seen if making adoption faster actually helps.