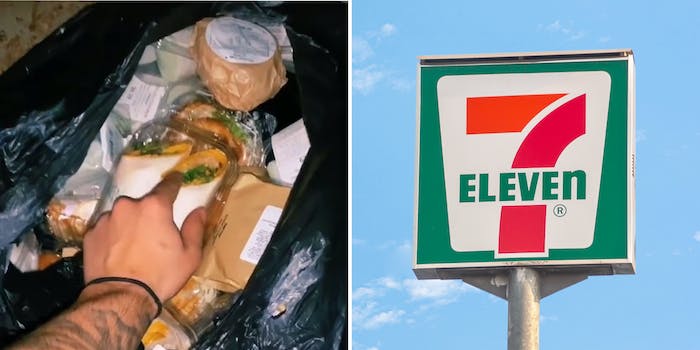 'I'm not throwing that sh*t away. I ain’t gonna be the one.'

A 7-Eleven worker says he was fired after his video showing his workplace’s food waste went viral. User Mason (@xoxo_airez) posted his first video on the subject, which features the location allegedly throwing out dozens of bottles of water, to an account that has since been deleted, later reposting it to his new account. He also posted another video on the topic to the new account, this one showing the location allegedly throwing out boxes of prepackaged food.

The latter TikTok currently has over 14.1 million views.

“I don’t agree with this shit at all,” Mason says in his food waste video. “My manager wants me to throw all this good food away, bro. This shit’s not even expired or nothing. … We got too much in the inventory. We got an extra shipment, and we have to write this all off as scrap, bro. But ain’t nothing wrong with it, bro! It’s fine! They want to throw all of it away. I don’t agree with none of it.”

At the video’s conclusion, he offers the 7-Eleven’s location and an image of where he’s leaving the bag in hopes that unhoused people or anyone who needs the food can find it.

“I’m not throwing that shit away. I ain’t gonna be the one,” he says.

In his other video, he alleges he was asked to throw away a significant amount of bottled water.

“I just am overly concerned at the fact that we are told to throw away all this shit,” he says in the video, which shows him unloading a tub of water bottles into a dumpster. “I asked to donate it, and my manager told me if I asked again, I would lose my job.”

“Perfectly good waters. Lots of homeless shelters. And unless they have the random idea to come dumpster dive, this is all just wasted,” he finishes. “We need to put in like some type of petition or some shit to corporate because this is just bullshit, bro.”

In the comments under his food waste video, Mason claims that making these two videos led to him losing his job.

“Officially lost my job! But that’s okay,” he wrote. “I’ll be going to Walmart with the same energy!”

Commenters supported Mason throughout his posts.

“I used to be homeless and people like this were super appreciated, it always made our days when someone treated us like people,” one user shared.

“Risking his job for the homeless,” another added. “God bless you bro.”

Most of the anger under the post was directed at 7-Eleven and businesses like it that throw away uneaten food.

However, a few commenters questioned whether it was possible for 7-Eleven to donate this food at all.

While there are some issues and difficulties regarding food donation, businesses can find methods for donating and frequently do so, notes the Environmental Protection Agency (EPA). Plus, businesses can occasionally receive tax benefits for donations, and the Bill Emerson Good Samaritan Food Donation Act protects them from liability for any damage so long as they meet certain requirements.

It’s for this reason that many commenters are calling out 7-Eleven and other businesses that waste food.

“It should be illegal for business[es] to throw away perfectly good food,” a user wrote. “They should be fined if they do.”

The Daily Dot reached out to Mason via TikTok comment and 7-Eleven via email.