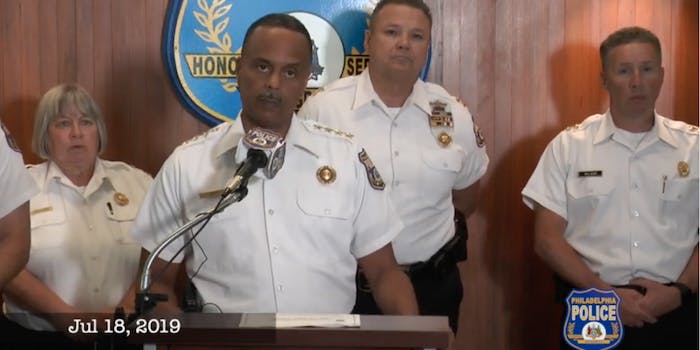 The officers demonstrated 'little or no regard for their positions as police officers.'

The Philadelphia Police Department is set to fire 13 police officers and suspended four others in response to a recent study that revealed officers’ racist and violent social media posts, Philadelphia Police Commissioner Richard Ross Jr. announced in a press conference on Friday.

After two years of research, a team of attorneys working with the Plain View Project released a study in June. The attorneys searched the Facebook profile pages of current and retired officers from a handful of police departments throughout the country. The study found more than 5,000 problematic social media posts among the officers.

The study found that one in five active officers routinely posted racist comments on their social media. Attorney Emily Baker-White led the project and posted a tweet thread the day the study was released, calling for a nationwide conversation about violence and prejudice in policing.

“We believe that these statements could erode civilian trust and confidence in the police, and we hope police departments will investigate and address them completely,” the team wrote in a statement on its website.

The Philadelphia Police Department had the highest number of offensive posts. The attorneys compiled 3,132 instances of racist or violent comments. One of the officers posted a meme with the words “Death To Islam” on it. Another officer commented that people guilty of crimes should be “exterminated.”

Ross announced that the department completed a review of the 328 active police officers who posted offensive social media content.

In the immediate aftermath of the study, the department removed 72 officers from the streets. Ross said that “many” of those 72 officers will be reprimanded, with punishments ranging from five days suspension or longer to being fired. The latter suspension is reserved for officers who not only posted offensive material but also demonstrated “little or no regard for their positions as police officers,” according to Ross. Ross said that 13 out of the 17 officers who fall into that category will be suspended for “30 days with the intent to dismiss” while the other four officers will receive a 30-day suspension.

Philadelphia wasn’t the only city implicated in the study, as 25 Dallas police officers are also under investigation for their social media posts.