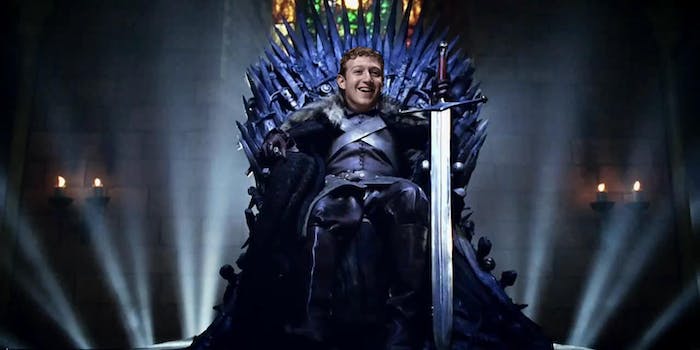 Zuckerberg delayed the Instagram deal to watch “Game of Thrones”

In a new account of Facebook's buyout of Instagram, Kara Swisher reveals that Zuck had his priorities in order.

Only Mark Zuckerberg could throw a billion-dollar deal on ice to sit down with his friends and watch Game of Thrones.

We’re at least a few years away from calling the 28-year-old Facebook CEO an eccentric billionaire (because a) he’s not old; and b) he hasn’t thrown stacks of benjamins from a hot air balloon just yet), but this is just one of the few details about the Facebook-Instagram deal that shook up the Web last year.

Writing for Vanity Fair, Kara Swisher has a comprehensive look at how the deal went down. Instagram’s cofounders Kevin Systrom and Mike Krieger opted to sell to Facebook—rather than take a competing offer from Twitter—because, as Systrom told Krieger, “I really like Mark, and I really like his company. And I really like what Facebook is trying to achieve.”

Swisher’s is a fascinating piece detailing not just the agreement between Systrom and Zuckerberg, but the history of Instagram. If you’ve any interest at all in Instagram, Facebook, or Silicon Valley, it’s well worth reading. Here’s a look at what you might not have known about Instagram or the deal before now:

How filters came about

Instagram’s defining feature is its filters that make photos look as though they’ve emerged from the ’70s, giving an instant vintage feel. Systrom got the idea after his girlfriend mentioned his photos would never look as good as those taken by a friend, who ran his images through filter apps.

Twitter’s offer was made over drinks at a campfire

Twitter executive chairman Jack Dorsey (who sat next to Systrom while the latter was interning) and the company’s then chief financial officer made Systrom what they believed was a formal offer to buy Instagram during drinks by a campfire. That led to a delay in the Instagram-Facebook deal closing due to an antitrust hearing. Still, nine-figure deals proposed around a campfire? Silicon Valley is so casual.

Zuck and Systrom already knew each other

Zuckerberg and Systrom knew each other casually long before Instagram. Zuck even tried to convince Systrom to drop out of Stanford to join him at Facebook, and the pair had dinner a few times at Zuck’s house after Instagram was released. That nascent familiarity perhaps helped the negotiation process last just two days, from Good Friday to Easter Sunday (we’re guessing plenty of eggs were rolled at Instagram’s office that weekend). The deal was announced the following day.

Mark Zuckerberg will not delay Game of Thrones for anything

The best detail in Swisher’s story is this one:

“Saturday, Systrom was back at Zuckerberg’s to formalize the negotiations and come to an official acquisition agreement, which they would both sign. Their back-and-forth was interrupted by a television-watching party for Game of Thrones that Zuckerberg, an avid fan, was throwing.”

Billion-dollar deals clearly take a backseat to the fate of Westeros in Zuckerberg’s eyes (he Likes the show on Facebook, of course). Systrom, on the other hand, was on the phone to lawyers and investors to get them to sign off on the deal. A Stark comparison in priorities for those two men on that April 2012 weekend.