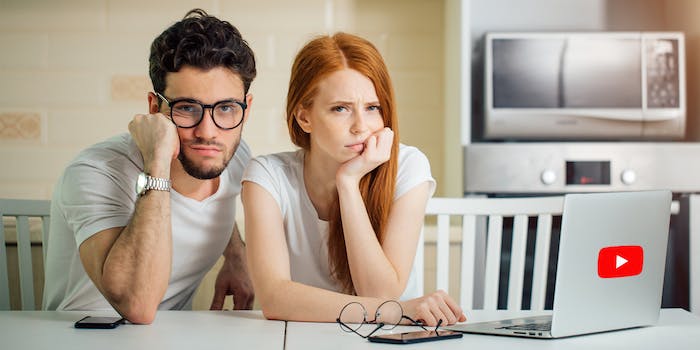 YouTube says the issue has been resolved. But the money is still gone.

On April 23, YouTuber Gavan Sullivan uploaded a new video to his channel, TheRealSullyG. Like many of his posts, it was a song cover illustrated with animation and brought to life with his instrument of choice: the Otamatone, an electronic synthesizer shaped like a music note. Within days, it had more than 1.3 million views.

Since starting the channel in 2015, Sullivan has racked up more than 200 million views primarily through videos like these, which can range from seconds to minutes long. But the next video in his feed, posted this Monday, stands out from the rest. Rather than the cartoonish face of an Otamatone on the thumbnail, it’s Sullivan’s own face peering out from above the title, “YouTube is Killing Our Channels.”

“I apologize in advance, this is not an Otamatone video. I’d love for it to be an Otamatone video, but unfortunately, YouTube has put me in the position that I have to make this video,” Sullivan began. He went on to explain that creators like him had noticed a nosedive in revenue on their shorter videos, which were no longer being served with pre-roll ads. He dubbed it the “shortpocalypse,” alluding to the 2017 “adpocalypse” that saw creator earnings plummet when YouTube changed its algorithm. This time, though, there was no explanation for why this shift had happened, as Sullivan said YouTube insisted that no changes had been made.

By then, other YouTubers were also raising flags about the issue, which most traced back to the week of April 12.

“@YouTubeCreators hello is there a reason revenue has significantly dropped to about 10 cents per 1k views for people who make shorter videos? Multiple people who make memes & animations I have spoken to have all been affected over the last 10 days, is there a reason for this?” posted YouTuber Dolan Dark, sharing a screenshot that showed a notable dip in his earnings after April 16, which appear to have been cut in half.

Two meme accounts, Arcade Assassin and SilentMemer, offered their own explanations of what they referred to as “the end of memes” and meme channels on YouTube due to the shorter-form content on these types of accounts.

YouTube and its algorithms are known to prioritize longer videos to increase time on site. Speculation that the move was a way to punish shorter creators was rampant.

Like Sullivan, both expressed frustration in particular at the lack of an official response from the platform, despite repeated requests and a clear pattern.

Then, on Tuesday night, they received an answer, tweeted in response to Sullivan’s concerns.

“Wanted to let you know that our teams investigated & we found an issue that caused pre-roll ads not to serve on videos less than 2 mins long,” @TeamYouTube wrote. “This was unintentional, and as of yesterday is now fixed—you should see your revenue data in YTA return to normal within a few days.”

In a call with the Daily Dot the following day, Sullivan said it does appear the issue has been fixed, though he noted there was no official statement from the company about the problem, just responses to direct questions.

“The acknowledgments they were making were replies to our tweets so it was not even a public, like, ‘Hey YouTube community, there was an issue,’” Sullivan said, adding that he felt it was therefore his responsibility to get the word out about their response.

Clay Patterson, the creator behind the Arcade Assassin account, told the Daily Dot he also heard from a YouTube employee directly, who messaged him, “We identified an issue with pre-roll ads not serving on a small subset of videos.” For Patterson, this explanation felt like “they are trying to divert as much blame as possible.”

“I am very glad that my fellow creators and I could come together to spark this change, but if something as big as this can come and go so easily, it really makes me fear for the platform’s future,” Patterson said.

While Sullivan said he’s now back to “business as usual” with his regular posts on the platform, he did share Patterson’s concern about the ongoing lack of transparency between YouTube and its creators.

“I guess it’s business as usual until something like this happens again, which if I’m being completely honest, it probably will,” he said. “This kind of stuff always happens with YouTube, so I’ll just keep making content until we have to take up arms again and fight for a different cause.”

In an emailed statement, a YouTube spokesperson said, “We identified an issue with pre-roll ads not serving on videos less than two minutes long. We’ve quickly taken action to fix the issue and apologize to any creators that may have been impacted.”

This means creators should be seeing pre-roll ads back on their videos, though it might take a few days for that to be reflected in the revenue. However, the fix does not account for the funds lost due to the issue, which brought earnings down to “all-time lows,” according to Patterson. Since there were no ads on those videos, that money was never generated for creators—despite the fact that the problem was due to a platform issue. Given that it lasted two weeks, it’s essentially a whole paycheck down the drain.

TheRealSullyG, Arcade Assassin, and SilentMemer accounts have all posted update videos to celebrate getting a response from YouTube on the issue. All three videos are under one minute long.