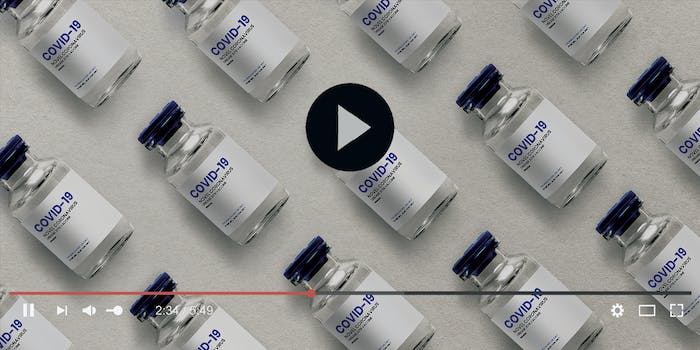 Prominent anti-vaxx voices have been removed.

YouTube announced on Wednesday a site-wide ban on vaccine misinformation and the suspension of several high-profile accounts.

The video-hosting service stated in a blog post that it would be expanding its medical misinformation policies with new guidelines on vaccines.

“Specifically, content that falsely alleges that approved vaccines are dangerous and cause chronic health effects, claims that vaccines do not reduce transmission or contraction of disease, or contains misinformation on the substances contained in vaccines will be removed,” YouTube wrote. “This would include content that falsely says that approved vaccines cause autism, cancer or infertility, or that substances in vaccines can track those who receive them.”

As a result, accounts belonging to prominent anti-vaccine advocates such as Dr. Joseph Mercola, Robert F. Kennedy Jr, and Sherri Tenpenny, have been terminated, as Axios reported.

YouTube says the crackdown builds upon its previous policies on COVID-19 misinformation, which resulted in the removal of more than 130,000 videos since last year.

The tech company explained, however, that certain content would be permissible as exceptions to the new rules. Scientific discussions on clinical trials and historical overviews on the successes and failures of vaccines, for example, would be allowed.

YouTube says it will also allow personal testimony regarding users’ experience with vaccines, but would remove videos from those who “generalize and make calls for all parents not to vaccinate or makes broad claims about vaccines not being safe or effective.”

“Today’s policy update is an important step to address vaccine and health misinformation on our platform, and we’ll continue to invest across the board in the policies and products that bring high quality information to our viewers and the entire YouTube community,” YouTube added.

While many major promoters of anti-vaccine content have since been removed from the platform, NBC News notes that smaller influential channels still remain.