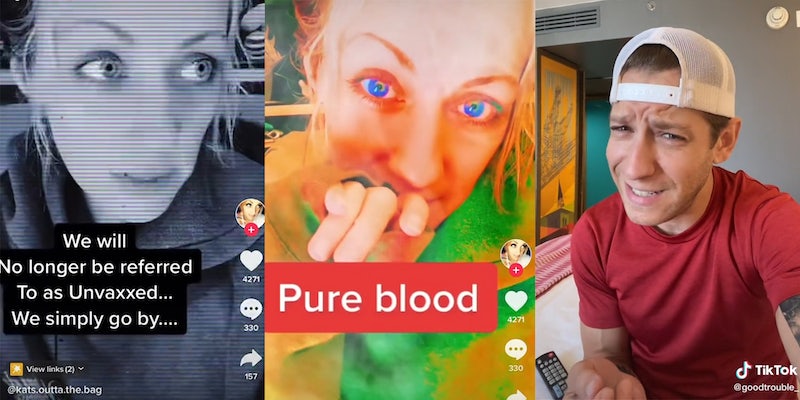 Anti-vaxxers are now identifying themselves as ‘pure bloods’

'So first you were comparing yourselves to the Jews and the Holocaust, and now you’re the Nazis?'

A week ago, if you searched “pure blood” on TikTok, you would probably only see videos from Harry Potter enthusiasts. Now, however, you’ll get a “distressing content” warning and videos of anti-vaxxers claiming the phrase as their new nickname.

It is not entirely clear who started the trend, but the popularity of a video posted by TikTok user @kats.outta.the.bag suggests that it originated with her. The now-deleted video shows the TikToker with a static, black and white filter and on-screen text that reads, “We will No longer be referred To as Unvaxxed… We simply go by….” She then covers the camera with her arm as the beat drops and pulls it back to reveal a colorful, smoky filter and the phrase “Pure blood” highlighted in red.

The TikToker states in a video and comment that she used the phrase as a Harry Potter joke. User @vitaltreasures, another “pure blood,” also said that the name was a joke in response to the Daily Dot’s request for comment. She stated that the name was a reference to the show True Blood, however. She did not respond to a question asking how the show inspired the trend.

The “pure blood” trend is not the first time anti-vaxxers have used pop-culture references to identify each other on TikTok. They previously used the audio of The Hunger Games whistle to “call out” to their un-vaxxed “brothers and sisters” and find out what state they were from. They have also used audio from Transformers (2007) in which Optimus Prime says, “I send this message to any surviving Autobots taking refuge among the stars: We are here. We are waiting.”

Comments on the TikToker’s subsequent videos criticize her use of the term for its reference to the Harry Potter villains, and others connected the term to Nazis and the inbreeding of the British monarchy. In a video posted Saturday that has gotten over 300,000 likes, TikTok user @goodtrouble_ shows @kats.outta.the.bag’s video then says, “So first you were comparing yourselves to the Jews and the Holocaust, and now you’re the Nazis? Pick a fucking lane.”

@Kats.outta.the.bag disagrees with the connection to Nazism, however. In a video posted Friday, she responds to user @crazymotherrunner’s comment that her use of the term has “racism undertones” by saying that people are just looking for something to be mad at.

“If we’re really gonna compare other people’s actions to that time period, y’all are the one that’s going around rattin’ everybody out to the government,” the TikToker says in her video. “You’re also mass-reporting pages to get people to shut up so that’s lookin’ a little [raises eyebrows] as well.”

In the comments of a video stitched to the original, user @distractionist notes that the term “pure blood” is a Nazi term for “Aryan supremacy” and is a White supremacy “dogwhistle.” However, even without this historical context, @kats.outta.the.bag cannot escape the associations of the term with Nazism by saying she was just referencing Harry Potter. J.K. Rowling said herself in a  2007 Dateline interview that there are conscious “overtones of Nazi Germany” in the books.

In a 2007 response to a fan question on her official site, Rowling stated that if people found the racialized terms “pure-blood, half-blood, and Muggle-born” far-fetched, they need only reference “real charts the Nazis used,” which she reportedly saw at the Holocaust Museum in Washington. She had already come up with the terms for the books, and was “chilled to see that the Nazis used precisely the same warped logic as the Death Eaters.”

The trend has yet to take over the TikTok sound “sunet original” by user @v.ira, which most “pure bloods” are posting under, but it has already made its way to Twitter where people are also noticing the similarities to Nazism.

One user, @AndytheCorsair, says that he has “yet to see a person who isn’t white describe themself this way,” and the TikTok search results of “pure blood” largely confirm this. However, in defense of @kats.outta.the.bag, user @lastkoonkano, who is a Black man, said that though the term was used in a racist context in the past, @kats.outta.the.bag is not racist for using it in the context of refusing to get a vaccine and putting “synthetic shit” in her body.

“I’m unvaccinated, which, in turn, would make me a pure blood, so what the fuck are you gonna tell me?” he says at the end of the video in an apparent attempt to prove that the trend isn’t racist.

A duet chain featuring user @jl_do_tell, who is also a Black man, has received over 14,000 likes and is one of the only other examples of a person of color referring to themselves as a “pure blood” on TikTok.

Many TikTok users are commenting on pure bloods’ videos asking if being “pure blood” means they’ve never had a vaccine before. User @vitaltreasures refused to answer the Daily Dot about her vaccine history, citing her HIPPA rights. Those who have chosen to disclose that information have either said that they have never been vaccinated in their lives or that they have never gotten an mRNA vaccine.

It seems that people who have been vaccinated can still be considered “pure blood” if they don’t get a COVID shot because of misconceptions about mRNA vaccines. Anti-vaxxers believe that mRNA vaccines “change your DNA,” though the CDC says this is not true because the mRNA does not reach the cell nucleus, where DNA is held.

The Johnson & Johnson vaccine is not mRNA, but pure bloods do not seem to differentiate between the vaccines and instead collectively refer to them as “the vaccine” or “the jab.”

Though it is not as widely mentioned as the DNA-altering theory, there is a theory that the COVID vaccines affect your blood, which may be another factor in the choice to use “pure blood.” In a now-deleted video that had almost 5 million views and 300,00 likes, TikTok user @coffeeaddictedspiritual shares a video of a “news clip in America” where a doctor states that the vaccines are changing people’s red blood cells.

As one commenter corrected, the video @coffeeaddictedspiritual was sharing was not actually a news clip, rather it was a clip from The Stew Peters Show, a show hosted by right-wing podcaster Stew Peters. His guest, Dr. Jane Ruby, has made numerous false claims about the vaccines, including the claim that they are “magnetic,” and the video was debunked by the Reuters Fact Check team.

Perhaps @kats.outta.the.bag was only trying to make a Harry Potter joke, but it has turned into more than that. Commenters on both TikTok and Twitter have made claims that suggest that the idea of “pure blood” will influence major decisions in their lives.

“I will not date or have a child with someone who had the shot,” TikTok user mike marcellin commented.

On Twitter, one user stated that they would only accept blood from an unvaccinated person if they needed a blood transfusion and would request tests and paperwork to prove it. Others stated that pure blood sperm would be “worth a fortune” in the future, which does not help to further the movement from its Nazi associations.

Update 1:55pm CT, Sept. 21: The TikTok posted by @coffeeaddictedspiritual showing a clip from The Stew Peters Show has been deleted.