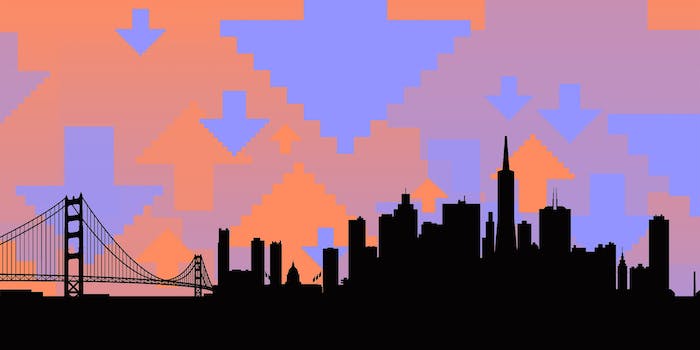 Yishan Wong took to Quora to explain: He just wanted to downvote the rent.

On Thursday, it was announced that Reddit CEO Yishan Wong was stepping down from his position. The move was certainly unexpected. The popular and influential social news site had just received a $50 million infusion of venture capital from tech luminaries like Peter Theil and Snoop Dogg. Things were looking up.

While Wong’s departure was certainly a shock, even more surprising was the reason given for the split. In a blog post that same day, Reddit investor Sam Altman wrote:

The reason was a disagreement with the board about a new office (location and amount of money to spend on a lease). To be clear, though, we didn’t ask or suggest that he resign—he decided to when we didn’t approve the new office plan.

The CEO of the one of the most influential companies on the Internet voluntarily stepping down over office space would seem insane, but that’s only if you ignore the complete and total insanity of San Francisco’s real estate market.

In a Quora post early Friday morning, Wong corroborated Altman’s account of why he quit, but pointed to a more fundamental reason about being burnt out. “The job as CEO of Reddit is incredibly stressful and draining. After two and a half years, I’m basically completely worn out, and it was having significantly detrimental effects on my personal life.”

Wong continued by going into the crux of his disagreement with the company’s board of directors.

I feel the board is a very supportive and friendly one, but we had a strategic disagreement wherein I felt that locating an office in San Francisco proper is an incredibly difficult thing given the strains the city is facing and the high rents it imposes on employees who wish to live close to the office. On the other hand, many of our current employees live there so the proposal to find an office location just outside the city (Daly City is immediately to the southwest outside of SF) was very unpopular, and there are plenty of startups who locate in SF and are very successful.

Reddit has long had a presence in San Francisco’s SoMa district, but the company recently announced it was centralizing its staff in the city after years of also having offices in places like New York and Salt Lake City.

Moving all of the company’s employees into San Francisco meant that Reddit was going to need more office space. In the midst of San Francisco’s social media-fueled dot com boom redux, office space is a scarce quantity.

The reason for this sky-high expense has a lot to do with talent. As much as the goal of much of modern tech is to replace human capital with work done more cheaply and efficiently by machines, the tech companies themselves depend on nabbing the most talented developers possible. These developers are often attracted to a company by the quality of life working there offers. Engineers living in an apartment in San Francisco’s trendy Hayes Valley area would much rather have their commute be a ten minute bike ride to the next neighborhood over rather than a 45-minute train ride down to Silicon Valley. Locating a business inside of San Francisco proper is a huge draw to attracting top talent.

However, since San Francisco is already densely developed, tightly packed in by geographic constraints, and beholden to a legal and regulatory scheme that makes new construction projects a slow and expensive process, desirable office space isn’t exactly plentiful. This scarcity, and the fact that a lot of tech companies are swimming in venture (and occasionally actual) cash, is what makes office space in a desirable location so expensive.

Also, for a company like Reddit flush with $50 million of new funding that’s hungry to grow, finding 5,000 square feet of space to house new employees in a trendy area may be difficult no matter how much cash a company’s management is willing to throw at the problem.

A few years ago, Twitter was pushing up against the physical limits to its growth in its San Francisco office and threatened to move down to Brisbane, a city located just southeast of San Francisco. In order to entice Twitter to say, the city not only helped the micro-blogging service find ample office space in a centrally located neighborhood local officials had been desperately trying to gentrify, but also handed the company a massive tax break exempting it from city taxes on its then-impending IPO.

One recent estimate predicted that the tax break alone will cost the city in excess $34 million over the next few years. That’s the level of incentive that was necessary for city officials to convince Twitter to not decamp for thriftier pastures.

In a lot of ways, Twitter was a special case. It’s one of the highest-profile companies on the Internet and its threatened move came at a pivotal time as the city’s new mayor, Ed Lee, was working to establish a reputation as the most tech-friendly politician in the country. Some of the tax benefits initially extended to Twitter have been institutionalized, but it’s unlikely that city officials would roll out the red carpet to the same degree to keep Reddit from parking all of its newly relocated employees somewhere just outside the city limits.

It’s understandable that the to-be-or-not-to-be in San Francisco question is one that could be make-or-break for Wong. Finding office space in the city is really, really expensive—a cost that, over the long term, could have a substantial effect on the company’s bottom line. On the other hand, when Wong wrote that proposals to move the office out of the city were “very unpopular,” he almost certainly wasn’t kidding. For people who live in San Francisco, being able to also work in the city is an enormous benefit. The tradeoff for where to locate was largely one between cost and employee morale.

The price of real estate is important everywhere; but, in San Francisco, the shadow it casts over ever aspect of life is impossible to overstate.

Wong is being replace by Ellen Pao, who is stepping in as interim CEO. Alexis Ohanian, the site’s founder, is returning to lead the company as the executive chairman after stepping away for a day-to-day management role.

“I specifically asked for Alexis to be included on the board and I’m happy he’s able to make the time now to be more involved as executive chairman,” wrote Wong in his Quora post, indicating that Ohanian isn’t stepping in without his permission.