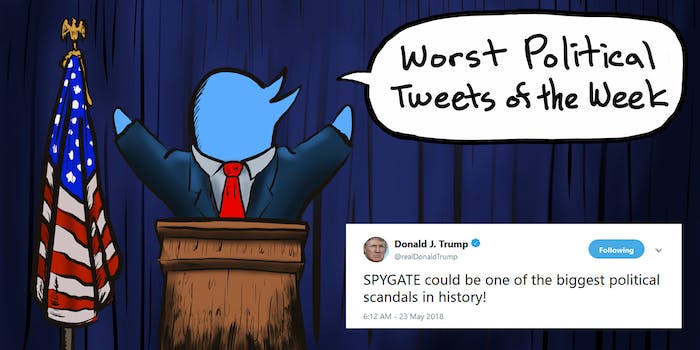 There are a lot of bad political tweets. Here are the worst.

It’s key to riff on the worst political tweets of the week. There are hundreds of bad thoughts shared on Twitter by lawmakers and pundits, but through a combination of misplaced values and shocking hubris, the week’s gems are never hard to find.

For the first time ever, President Donald Trump makes our weekly chart.

Here are the worst political tweets of the week, broken down by the Daily Dot’s politics team, Andrew Wyrich (AW) and Ellen Ioanes (EI).

EI: So gross. Who would say that about Rick Perry? That’s some Game of Thrones shit.

AW: I’d pay to see a Game of Thrones-style intro for the 2018 midterms. Washington, D.C., would need to have the swamp overgrowing over everything, right?

EI: The intro is the only part of GoT I’ve ever seen. (And I’m def picking up what you’re putting down).

AW: Eh, don’t get into it now. It got bad about three seasons ago.

AW: Ellen, clearly he means the Deep State is scheming to take down the president. [Insert Charlie from Always Sunny‘s map meme here].

EI: Mike Flynn Jr. really is the Charlie of the gang.

AW: How could we have a worst political tweets of the week list without this gem?

EI: Oh, the dunks that are happening AS WE TYPE.

AW: The best is that “Spygate” is already a thing.

EI: You’re naming scandals after a hotel. Do people think about that?