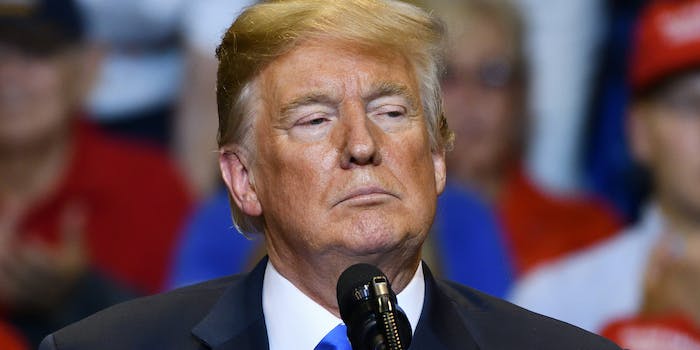 The presidential text alert system is rife for conspiracy theories

No, it can't hijack your phone.

In a test postponed from mid-September to Tuesday, FEMA sent the first message over the Wireless Emergency Alert (WEA) system. The message took the form of an alert text from the president, and informed cell phone users that they did not need to take action.

The WEA was part of a sweeping civil defense law called the WARN Act, signed in 2006 by George W. Bush. It allows FEMA to send emergency messages to the population through the president—messages that, unlike Amber Alerts, can’t be opted out of and can’t be blocked.

Everyone got the presidential alert and couldn’t do anything about it. Well, not everyone, as the test seemed to not work for some people. But most people got it—and many weren’t happy about it.

How do I stop a sexual predator from texting me?
Asking for 225,000,000 friends. #PresidentialAlert

In reality, the ability to send emergency alerts, for disasters such as a nuclear attack or massive weather event, is a common-sense extension of the government’s use of radio and television to send such messages. Text messages are simply a more efficient way to reach people on the device they’re most likely to interact with.

The government’s ability to reach citizens whether they want it or not is nothing new.  t began in 1951 with CONELRAD, a national early-warning system that would use two pre-designated radio frequencies to broadcast alerts and updates.

These frequencies and systems have never been used for nefarious or propaganda purposes. But this history, and the real-world need for quick and efficient warnings in the case of a national disaster, didn’t stop a slew of conspiracy theories from emerging—most asking what the WEA was REALLY going to be used for.

Popular fringe hotbed r/conspiracy was full of threads declaring that the text alert was the harbinger of some kind of direct action by the president.

“Why does it feel like the Presidential Alert that was sent is foreshadowing something?” asked a thread with over 400 responses, which ranged from it simply being creepy to being “predictive programming,” lulling citizens into a false sense of security to being linked to the false alarm alert in Hawaii in January.

Other Reddit threads declared the alert was everything from a signal designed to turn us into savage killers to the timing (it was sent at 2:18 EST) being related to a Bible verse.

The conspiracy theories weren’t limited to the fringes of Reddit, either.

Former U.S. Attorney and Trump nemesis Preet Bharara wondered openly what would prevent Trump from using the wireless alerts to attack someone or promote himself. (For the record, the president using the system for his own benefit was banned by a 2015 law signed by Obama that integrated various state and local alert systems.)

A thread on Nextdoor wondered if the alert was actually some kind of harbinger from the Book of Revelation.

Want to know why the presidential alert was scheduled for 11:18am? pic.twitter.com/27N8eTorT7

Liberal filmmaker Michael Moore referenced various fears that the president was planning to use the alert as some kind of declaration of a fascist takeover when he tweeted that the alert was “a preview of the state of emergency [Trump] is creating to justify the end of democracy as we know it.”

“It was just a test. But make no mistake about it. This is the world in which we now live.”
That’s my final line in “Fahrenheit 11/9”. A few minutes ago, Trump gave us a preview of the state of emergency he is creating to justify the end of democracy as we know it. RESIST! pic.twitter.com/M8g3NebFQ2

Even cybersecurity guru John McAfee got in the act, declaring that the alert was actually a secret ability to “access every function of your phone.”

The "Presidential alerts": they are capable of accessing the E911 chip in your phones – giving them full access to your location, microphone, camera and every function of your phone. This not a rant, this is from me, still one of the leading cybersecurity experts. Wake up people!

This is not what the WEA does. In fact, it’s not what any system does. As the Electronic Frontier Foundation wrote, McAfee is wrong and there is no such thing as an Enhanced 911 chip, nor does the WEA system have any way to harvest or send data back to cell phone providers or the government.

It’s simply a one-way, unblockable text sent by FEMA to convey an emergency message. The president doesn’t write them and doesn’t have direct access to the WEA system. The worst President Trump could do is order someone at FEMA to send a non-emergency message, but there’s no guarantee they’ll do it.

While the government being able to send a message to everyone’s phone has an Orwellian ring to it, the conspiracy theories surrounding it are based almost entirely in fear and suspicion.

And of course, no modern conspiracy theory is complete without some kind of role for Q, the anonymous supposed Trump administration insider dropping hints about a vast deep state purge to come at any moment, carried out via mass execution after military tribunals.

Q made several references to the wireless text alert in his “intel drops” on image board 8chan, hinting that the test would be the beginning of a series of events leading to the final rolling up of the world-dominating cabal.

Hey, remember when #QAnon insinuated that the FEMA #PresidentialAlert would be used to announce some huge purge or document declassification?

I do. And guess what? He was wrong. Again. pic.twitter.com/Ko7DyUtECg

Q had teased that the alert would usher in “red October,” when Deputy Attorney General Rod Rosenstein would be fired, critical documents being declassified, secret testimony by Jeff Sessions, or Brett Kavanaugh being confirmed.

The test turned out to be only a test, and none of those things happened. But Q believers went wild over it anyway.

A thread on Voat (the replacement for the recently banned QAnon subreddit) was full of believers declaring they’d received the message, with a few openly speculating that it was the beginning of martial law, the first of many communications from Trump directly to his people, or that it was a secret hint from Q because it had 17 words, and Q is the 17th letter.

Just got my FEMA Presidential alert. Good to know I am a part of it all. #Qanon #MAGA #GreatAwakenening

While the presidential alert continues to be fodder for imaginary plots, it should be noted that even the conspiracy theories aren’t new.

In summer 2013, far-right bloggers and conspiracy theorists went crazy over the newest iPhone being wired into the WEA system, declaring that “AT&T is loading iPhones with emergency alerts from Barack Obama” and tossing out an early version of John McAfee’s paranoia, claiming “so now Barack can track your calls and send you messages, too.”

As it turned out, “Barack” never sent any messages over WEA. And when President Donald Trump did, nothing happened.