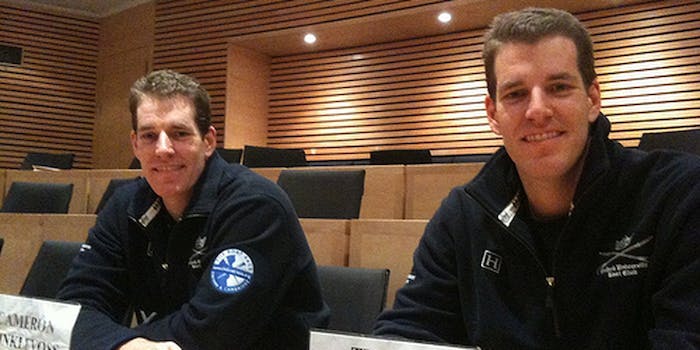 Cameron and Tyler Winklevoss, best known for their Facebook litigation, are seeking investors for their massive stash of Bitcoins.

Despite having lost millions in the last Bitcoin crash — or, more likely, because of it —  the Winklevoss twins are taking their Bitcoin speculation business public.

The Winklevoss Bitcoin Trust has filed an S-1 Registration Statement for an initial public offering (IPO) to the tune of $20 million.

Bitcoin is the stateless, digital currency that has seen wild fluctuations and, recently, increased interest by regulatory agencies. Today, it hit a two-month low of $82.

In April, the Winklevosses, who are probably most famous for their marathon litigation against Facebook and Mark Zuckerberg, which finally resulted in a settlement of $20 million in cash and $45 in Facebook stock, claimed to own 1 percent of the world’s Bitcoin supply—about $11 million worth. In the interim, as the currency dove from $260 to a post-crash average of about $100, they have continued to buy.

As Patrick Murck, general counsel for the Bitcoin Foundation, told Wired, the Winklevoss trust “puts the investment in a format that institutional and non-technical investors can get behind.” Institutional investors in particular, including pension funds, can have an outsized effect on stock value due to their purchasing power.

The offering is for one million shares, each consisting of .2 Bitcoins offered at  $20 each, and the prospectus contains 17 pages of “risk factors.” The trust will function as an exchange-traded fund (ETF).

Adam Draper, the head of BoostVC, an accelerator which has invested in Bitcoin startups, told the Daily Dot that the ETF is an “interesting way to give investors access to an investment in Bitcoin.” However, he also believes “they will have some trouble with the SEC long term, as regulatory bodies figure out where they stand on Bitcoin, however ETFs for Bitcoin will be an important part of the ecosystem.”

Quite aside from the peer-to-peer, decentralized, libertarian foundation of Bitcoin, the make or break for Bitcoin as an investment vehicle will no doubt be how companies intersect with various countries’ regulatory regimes.