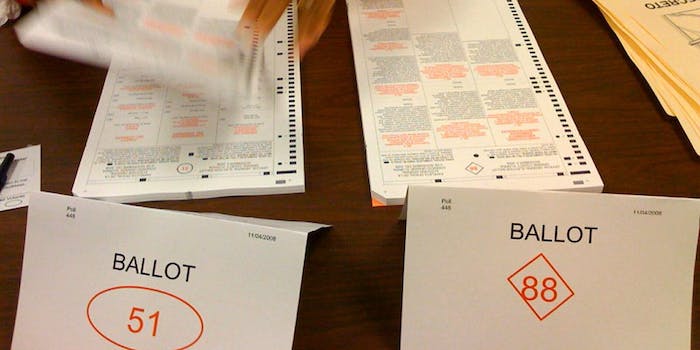 The first round of "winner-take-all" GOP primaries is today.

March madness is in full swing. A total of five states and the Northern Mariana Islands will hold contests on Tuesday, March 15.

Coined “Mega Tuesday” by the media, the day will bring a wave of firsts and new uncertainties to the 2016 election. The second-largest crop of delegates are at stake: a total of 691 for Democratic candidates Hillary Clinton and Bernie Sanders, and a total of 358 delegates for Republicans Donald Trump, John Kasich, Marco Rubio, and Ted Cruz.

For Republicans, it will be the first day that the Republican National Committee’s restriction on “winner-take-all” primaries won’t apply, meaning only one candidate will walk away with all the delegates in Ohio, Missouri, and Florida. This could equal a day of major wins for Trump, the current front-runner, or further level the field if one of his challengers wins a state—and the home states of two candidates are up for grabs. Trump is expected to finish first in Rubio’s Florida, but Ohio Gov. John Kasich may have the last laugh in the Buckeye State.

Last week’s surprise upset victory by Sanders in Michigan has raised the suspense-levels for the Democratic field. Experts are taking the Democrat’s polls with a grain of salt. Still, Clinton is leading in double-digits in Florida and North Carolina. But the Real Clear Politics polling average indicates that Clinton is ahead by just a sliver in Illinois and Missouri. Meanwhile, Yougov polls show that Sanders is ahead (though only by one or two points) in both those states.

#FloridaPrimary @BernieSanders has a plan for #climatechange and will fight to keep your state safe! #SuperTuesday2 pic.twitter.com/4VtBpRrgKZ

Here’s a state-by-state break down of the March 15 primaries:

Number of Delegates up for grabs: 214 for Democrats (proportional); 99 for Republicans (winner-take-all)

Number of Delegates up for grabs: 156 for Democrats (proportional); 69 for Republicans (54 awarded proportionally by congressional district; 15 awarded winner-take-all to whomever wins the state-wide vote)

Likely winner: Clinton (but only by a hair), Trump (but lower than usual).

“Trump is polling at only about 30 percent to 35 percent in most surveys. But Cruz, Kasich and Rubio are splitting the non-Trump vote, according to the polls. That could potentially make it difficult for the anti-Trump constituency to properly cast the most effective anti-Trump vote.”

Number of Delegates up for grabs: 71 for Democrats (proportional); 52 for Republicans (winner-take-all)

Likely winner: Unknown for Democrats. Only two recent polls have been conducted in Missouri, according to Real Clear Politics: Clinton has a 7-point lead in one and Sanders has a 2-point lead in the other. Trump is leading Cruz in Missouri, but only by 7 points.

Number of Delegates up for grabs: 142 for Democrats (proportional); 66 for Republicans (winner-take-all)

Likely winners: Clinton, Kasich. This could be the first major non-Trump Republican victory of the night. Real Clear Politics polling averages indicate that Kasich is either leading or tied with Trump in Ohio.

BREAKING! @realDonaldTrump has WON the Republican caucus in the Northern Mariana Islands. THANK YOU! Great start to #SuperTuesday!

Number of Delegates up for grabs: 9 for Republicans (winner-take-all)

The Wall Street Journal reported early on Tuesday morning that Trump has already won the GOP caucus in the Northern Mariana Islands.