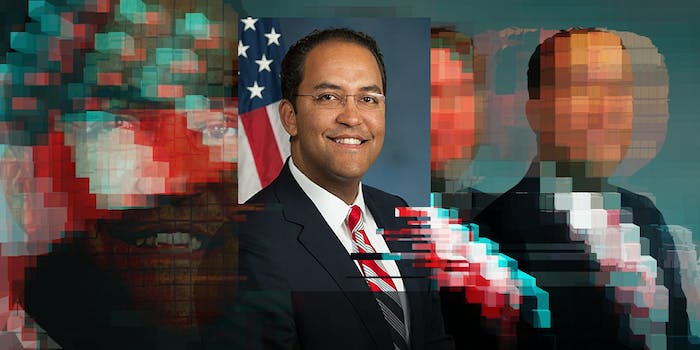 Meet Rep. Will Hurd, the most interesting man in Congress

'Encryption is good for out national security. ... We should be trying to strengthen encryption.'

There’s a very good chance that Texas Rep. Will Hurd is the most interesting man in Congress.

An African-American who grew up in San Antonio, Texas, Hurd got a degree in computer science from Texas A&M. He joined the Central Intelligence Agency and worked as an undercover CIA operative in Afghanistan.

Hurd remained in the intelligence community until he had a revelation. In the middle of patiently explaining the difference between Sunni and Shia Muslims to members of Congress, he realized the institution could really benefit from someone with real-world experience in America’s war zones.

So, he returned to Texas and ran for the House of Representatives as a Republican. He lost in 2010, but his second attempt in 2014 was successful, making Hurd the first African-American the Texas GOP had ever elected to national office.

“Our civil liberties are not burdens, they are what make our country great, and we should do everything to protect them.”

Hurd represents the predominantly Hispanic 23rd district in southwest Texas along the U.S.-Mexico border. In Congress, he’s developed a reputation as a wonky civil libertarian who focuses on cybersecurity as the chair of the Information Technology Subcommittee of the House Committee on Oversight Government Reform.

The Daily Dot sat down the Hurd amid the bustle of the South By Southwest Interactive Conference in Austin to talk about Apple, the Federal Bureau of Investigation, and the central idea of Republican presidential front-runner Donald Trump.

The Daily Dot: In New York Times reporter Charlie Savage’s book about the Obama administration’s national security policy, Power Wars, Savage argues that the framework from which the Obama administration makes decisions is largely one of lawyerlyness. The president is a lawyer who taught constitutional law. Joe Biden is a lawyer. A lot of the people around them are lawyers. Many members of Congress are lawyers. Your biography is very different. In your dealing with your peers in the House and people working in the executive branch, does that difference manifest itself?

Rep. Will Hurd: It causes friction. If I had to describe myself, I’d say I’m an operator. I was the dude in the back alleys at four o’clock in the morning collecting intelligence. When we found out that there was a threat to the homeland, we had to figure it out. … We didn’t have the luxury of saying, “We don’t have enough money” or something is too hard. You had to do it. When you’ve been on the ground … that brings a different perspective.

I look at Iran as a perfect example there. For almost 40 years, the Iranians have been lying to and misleading the IAEA [International Atomic Energy Agency]. They’ve been lying to and misleading the U.N. Security Council, and to think that because you sign some papers that a tiger is going to change its stripes, it’s naive. It’s based on not having real-world experience on these topics.

[Look at] the debate right now between the FBI and Apple. People don’t understand what’s really going on on the ground. If you were talk to the FBI agents on the ground and … Apple engineers, both sides will say the relationship is awesome. But, when you get to Washington, D.C., on the political side, that’s when things get a little messed up.

I’ve been shocked by the lack of experience on these particular issues that members of Congress are legislating on and the Executive Branch is executing on. And that causes friction.

Speaking at South By Southwest a couple days ago, President Obama made a similar statement, saying, basically, if technologists don’t find some sort of way to keep law enforcement satisfied on encryption, there’s going to be some major tragedy that will lead Congress to pass legislation that will introduce all sorts of vulnerabilities into tech products. Are they right?

For me, the fact that the director of the FBI and the president are escalating this debate in the court of public opinion is unacceptable and not at all helpful to actually solving the problem. Our civil liberties are not burdens, they are what make our country great, and we should do everything to protect them.

That’s why I’m supportive of Homeland Security Committee Chairman Michael McCaul’s [bill] to get law enforcement, the tech community, and academia together to say, “Let’s, first off, define the actual problem, and then let’s talk about some solutions. Let’s have a sober conversation and understand that we’re going to do this because it’s good for our country.”

That’s where the conversation needs to go. Not the director of the FBI [James Comey] pointing to a law written in 1789 before telephones even existed [as their justification for making Apple comply]. … The FBI does not get to tell the U.S. company how to build their widget, sorry.

Let’s stop acting like the iPhone is impenetrable, because it’s not. In this particular case, again, [it’s about] people not being operators. We have everything from the [terrorists who carried out the San Bernardino shooting‘s] iCloud [account]. We know all the applications that were on the phone. We know their cellular service provider. We know what email they were using. We know their user names. We know if he was using WhatsApp or Viber. All that information, we have.

“Encryption is good for our economy. We should be trying to strengthen encryption.”

A lot of the talk about this coming from the tech community is that the government’s goal here is setting a legal precedent that’s more sympathetic to law enforcement across the board on encryption rather than just about getting access to the data on this particular phone. Do you buy that argument?‘

Absolutely. They want to be able to do this one time so they can do it a thousand times. Somebody told me that there are something like 11,000 different government entities in the U.S.—municipalities, district attorneys, all that stuff—that have requested this type of information. The FBI has over 100 phones where they want to do the same thing.

The director of the FBI needs to be honest about what other requests that are out there, that they’re looking for, and not just saying they’re only looking for this one phone. They’re going to use it again.

As a black Republican who represents a largely Hispanic district along the Mexican boarder, I have to ask: Trump?

Donald Trump is not the first person to talk about building a wall from sea to shining sea.

It is the most expensive and least effective to do border security. We can secure our border and facilitate the movement of goods and services at the same time. Mexico is an important partner of ours. We need to be doing everything we can to increase trade and increase traffic and increase people-to-people connections. The idea of building a wall is silly. A wall is a tool in some places, but there are much more sophisticated ways of protecting our border.