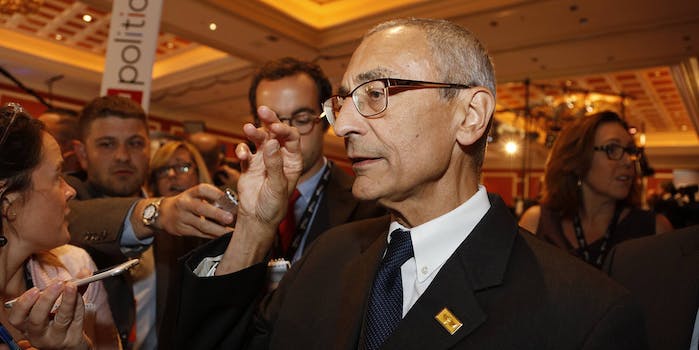 Did he ever hop over to Safeway for that Easter sale?

WikiLeaks released its latest dump of Podesta Emails from the Hillary for America campaign chairman. The 15th iteration bumps WikiLeaks‘ number of leaked emails from John Podesta to over 26,000.

As with all Podesta Email dumps, this certainly isn’t curated in the least bit. You’re looking at the correspondences of a man who gets campaign form emails from senate candidates, desperate pleas to connect on LinkedIn, and quite a few newsletters from Foot Locker.

So, how’s that whole “leaking for the sake of leaking” thing going?

To the exquisite creep who got my # off Wikileaks, I was gonna say: Jews don’t believe in hell

WikiLeaks used this latest round of Podesta Emails to tout its alleged decade long record of releasing authentic documents.

Did you know: That WikiLeaks has a perfect, decade long record of authentication?https://t.co/u9e5ecGaMc

“Over the 12 weeks marking the WikiLeaks anniversary, we will be producing [a] Top 10 Greatest hits to reflect on the ways WikiLeaks releases have impacted countries, regions and themes such as trade, spying, censorship, environment, banks etc,” the nonprofit touted.

It’s doubtful any of those greatest hits will include redactions of sensitive personal information but hey, that’s WikiLeaks for ya.