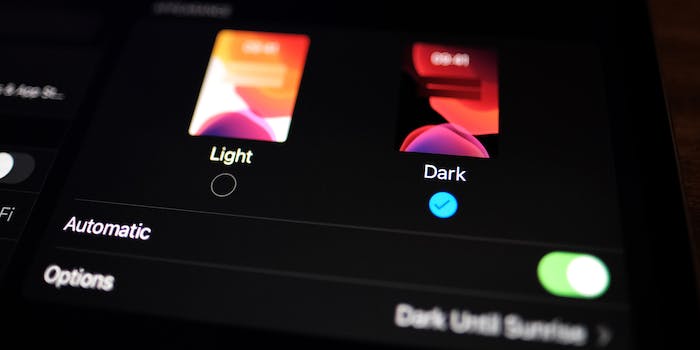 Why dark mode is the best app of the year

In 2018, the biggest names in technology seemingly unilaterally embraced the idea of “digital wellbeing.” Apple introduced its Screen Time feature and extended Do Not Disturb controls; Facebook launched its Time Well Spent initiative and the “you’re all caught up” message. At its developer conference, Google CEO Sundar Pichai spoke of “the joy of missing out.” These campaigns were prompted by industry and consumer concerns that devices and the software they provide are increasingly addicting, that their effects are harmful to our health, and that the companies creating them are doing nothing about it—or rather, that they’re capitalizing on it.

A handful of apps found success thanks to the trend toward mindfulness. Headspace, Calm, and Simple Habit were already popular but certainly benefited from the market attention. In 2019, another (perhaps less obvious) offspring of digital wellbeing efforts invaded screens, and it’s the obvious pick for app of the year: Sure, Instagram remains a juggernaut, and TikTok is a strange and exciting new world. Arguably 2019 was a significant rebirth for photo-editing app VSCO, which spawned its own real-life culture club. But the app of 2019 is not one app, but so many apps; it’s not even technically an app. It’s dark mode.

For those who’ve determinedly ignored dark mode (or rather, dark modes) and continue to strain their tired eyes, a quick explanation: Dark mode is an interface that changes the display of an app or operating system to a darker shade, and lightens the text so it’s visible against the darkened background. The idea is that option uses less light and thus less battery, and it’s also intended to reduce eye fatigue, particularly when browsing in lower lighting settings.

Dark mode was not invented in 2019, but it did infiltrate the App Store en masse. This year, both iOS and Android Q upgraded to include dark mode, and apps like Instagram, WhatsApp, Bing, Gmail, and Facebook all introduced the option. Various other websites did as well. Guides to turning on the tool flooded the internet; jokes were made; Halloween costumes created.

The small story is: In 2019, it became chic for an app to have dark mode. But the larger narrative is that the technology industry is finally beginning to acknowledge the role it’s playing in modern mental health. In part, these efforts are spurred by a genuine interest in and concern for consumers; and in part, businesses are doing them because, obviously, it’s good for business. (It’s also worth mentioning that dark mode could fall victim to the same monopolistic tendencies of big tech that digital wellbeing has: Apple removed a handful of popular screen-limiting apps from the App Store in favor of its own features. Will dark mode-specific, third-party apps that try to assist with screen glare get the boot too?)

But unlike many of the other features that are part of digital wellbeing launches, dark mode exists to make the time we spend looking at screens easier in a physical sense; it makes late-night scrolling better for our eyes and keeps phones charged longer. Which, actually, might not be so great: In reality, the strain of squinting at a glaring screen is a signal from our brains to log off—one that we’ve increasingly become adept at ignoring, and that we are happily creating tools for bypassing.

It’s a tricky time; things like dark mode are a handy way to straddle two intentions: It’s an improvement on the old system, and it helps people, but it’s also increasing the comfort of indulging in devices. Arguably what people actually need more of are things that make them less comfortable with always-on smartphones and screens ready for scrolling.

Of course, that’s unrealistic; the literal actual apps of 2019 (and before, and likely beyond) demand attention. Functions like infinite scroll have become standard, and hands-free, on-demand access to the internet via smart speakers is increasingly common. In a way, dark mode is the cool mom of the tech-scape: If you’re going to scroll Instagram at 2am in a device-assisted state of insomnia fueled by your internet addiction—and you are—we’d rather you do preserve your eye health and do it in this dimly lit house.