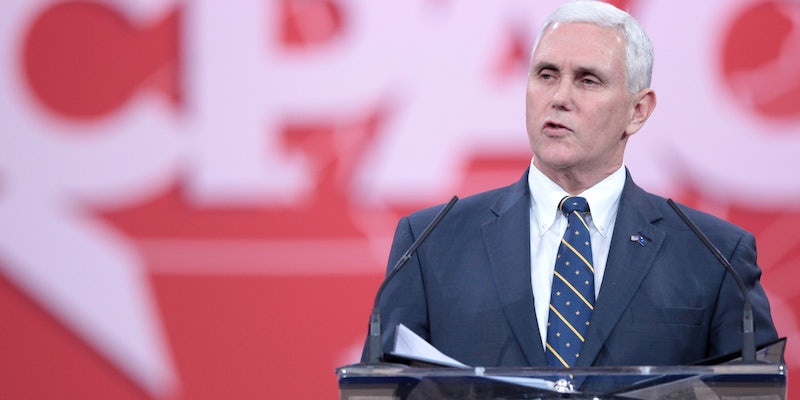 8 things every voter should know about Mike Pence, Trump’s running-mate

Get ready to hear a lot more about Mike Pence.

The Republican presidential ticket looks like it’s all filled out. Donald Trump, the presumptive GOP nominee, has chosen Indiana Gov. Mike Pence as his running mate.

Pence’s addition to the GOP ticket will be fully announced during an event on Saturday, Trump said in a tweet. Trump’s VP press conference was originally scheduled for Friday, but the campaign postponed it due to an apparent terrorist attack in Nice, France, on Thursday night.

I am pleased to announce that I have chosen Governor Mike Pence as my Vice Presidential running mate. News conference tomorrow at 11:00 A.M.

Here are a few key facts every American should know about Pence as we head into the general election.

1) Pence is a strict social and fiscal conservative

According to USA Today, Pence 53, describes himself as “a Christian, a conservative, and a Republican, in that order.” And Pence’s record as a U.S. congressman and governor reflects just that.

Pence recently championed tax cuts and limited spending and has fought for war, religious rights, anti-tax policies, pro-life legislation, and to define marriage as between a man and a woman, the Indianapolis Star reports. In 2011, the House approved his plan to cut off funding for Planned Parenthood after Pence and other GOP lawmakers claimed the women’s health organization is too aggressive about performing abortions. While Indiana was successful in its efforts, a federal judge blocked the law from going into effect.

Upon becoming governor in 2013, Pence continued to slash resources for Planned Parenthood. Mother Jones reports that, by 2014, state funding for the organization had been cut nearly in half from 2005 levels.

Pence has also been repeatedly praised for his support of religious freedom, potentially giving a Trump–Pence ticket more support from the Republican Party’s evangelical and conservative wings.

2) Pence has ties to Republican donors, including the Koch brothers

Pence could bring another thing to the table: ties to the billionaire conservatives Charles and David Koch. And given the large lump of money the brothers raised in the 2012 election—over $400 million—adding Pence would be a huge advantage for the presumptive GOP nominee.

A source close to the brothers told Politico in 2014 that Pence first piqued the Koch brothers’ interest after he vocalized his opposition to Big Government policies. While the article claimed the brothers were potentially grooming the Indiana governor to run in the 2016 presidential race, they may just have to settle for Pence’s position as Trump’s VP.

Since his initial wooing of the two megadonors, a number of Pence’s former staffers have assumed major roles for the brothers. For example, Time reports that Pence’s former chief of staff now runs Freedom Partners, a Koch political enterprise. In addition, the Kochs’ political group, Americans for Prosperity, has been drawing attention to Pence’s work in Indiana.

Just moments after Roll Call leaked that Trump would pick Pence as his VP, Twitter users resurfaced a December 2015 tweet in which Pence vocally opposed Trump’s plan to ban Muslim immigrants from entering the country. 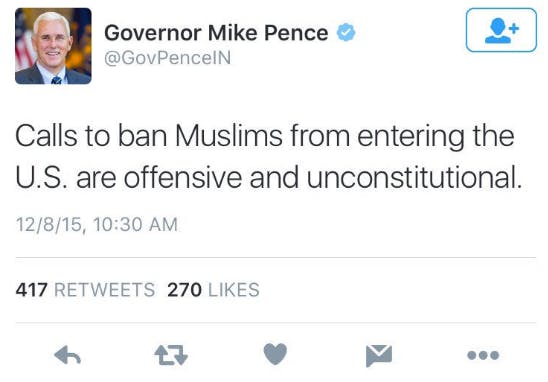 While Pence denounced Trump’s ban, last December, Pence defended his decision to suspend the settlement of Syrian refugees in Indiana “for security reasons.”

“I do strongly disagree with the call that would ban Muslims from this country,” Pence said at the time. “My concern with the Syrian refugee program has to do with the country of origin. It has to do with the fact that Syria is a war-torn country whose own regime has been exporting terrorism for years.”

In a recent interview with ABC News, Pence stood by his tweet about the Muslim ban, saying that although he disagrees with the proposal, he still supports Trump.

“I’ve taken issue with candidates from time to time,” Pence said. “But I’m supporting Donald Trump to be president of the United States of America.”

4) Pence started as a talk-radio host

Pence began his political career in the 1992 as the conservative talk-radio host for The Mike Pence Show— which aired on 18 radio stations—and later a Sunday morning talk show in Indianapolis. According to the Washington Post, Pence described his show as “Rush Limbaugh on decaf.”

Because of his ties to the airways, many Republicans have deemed him an excellent communicator.

5) Pence has a controversial record on civil rights

The Indiana governor has also been pretty vocal of his opinions on LGBT rights.

In 2003, Pence co-sponsored an amendment that declared marriages in the U.S. could only consist of a union of a man and a woman. He also voted against the repeal of the military’s “Don’t Ask, Don’t Tell” policy, saying, “homosexuality is incompatible with military service because the presence of homosexuals in the ranks weakens unit cohesion.”

In March 2015, Pence signed a controversial bill into law permitting business owners to refuse service to gay, lesbian, bisexual, and transgender customers due to their religious beliefs. The law, titled Indiana’s original Religious Freedom Restoration Act, allowed individuals and corporations to use religious beliefs as a defense for discrimination. Pence and other Republican lawmakers who supported the governor’s measure faced widespread criticism on state and federal levels; Miley Cyrus even went so far as to call Pence an “asshole” on Instagram. Ouch.

Not surprisingly, when gay marriage was effectively legalized nationwide in June 2015, Pence said he was “disappointed that the Supreme Court failed to recognize the historic role of the sates in setting marriage policy.” However, he did promise to uphold the Court’s decision.

Among other controversial rulings Pence supported was his vote to make the USA Patriot Act, the 2001 bill responsible for widespread expansion of U.S. surveillance activities, permanent. According to On The Issues, Pence believed the permanency of the act would extend and modify authorities’ power in order to both combat terrorism and for “other purposes.”

In June 2015, lawmakers approved the USA Freedom Act, rolling back a number of key surveillance powers enjoyed by the National Security Agency.

6) Pence has a lot of friends on Capitol Hill

Spending over a decade in the House definitely has its perks, and for Pence, one of those benefits comes in the form of powerful friends.

According to The Hill, Republican lawmakers with ties to the Indiana governor say Pence could be instrumental in helping Trump develop the relationships he needs in Washington. Even House Speaker Paul Ryan (R-Wis.), who hesitated to throw his support behind Trump, referred to Pence as a “personal friend.”

“I’d be dancing in the aisles,” Rep. John Carter (R-Texas), who used to attend Bible study with Pence, said of Pence getting Trump’s VP nod. “He’s one of the best we’ve ever had in Congress. I’d love to see Mike Pence be the guy. It’d be awesome.”

Pence was the chairman of the Republican Study Committee and the House Republican Conference. He was also assigned to the Foreign Affairs Committee.

Because of his extensive background, GOP members believe Pence could help rally Republicans behind Trump.

7) Pence and Trump differ when it comes to foreign trade

A September 2014 tweet by Pence shows the governor’s open support of the Trans-Pacific Partnership (TPP), an agreement that Trump staunchly opposes and has compared to rape. 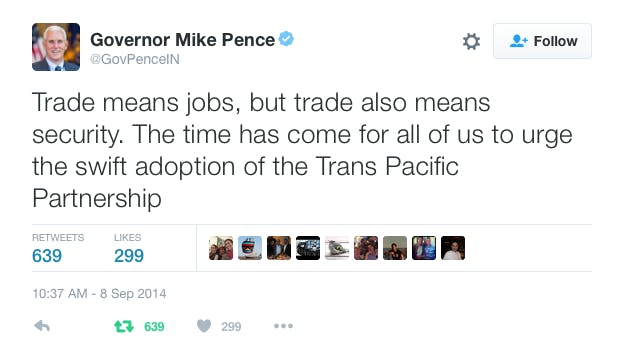 According to the Washington Post, Pence voted for every free-trade agreement—including ones with Colombia, South Korea, Panama, Peru, Oman, Chile, and Singapore—while he was a congressman.

In April 2015, Pence noted that Japan is his state’s largest trading partner; Indiana exported $1.6 billion in goods to the country in 2014. The governor also said that Germany—Indiana’s largest European partner—was similarly valued.

“Reducing tariffs and other trade barriers so that Indiana businesses can enjoy increased market access and fairly compete on the world stage is something that Congress must do,” Pence wrote in a 2015 letter urging congressional delegation to support trade promotion authority. “I encourage your support for Trade Promotion Authority, the Trans-Pacific Partnership, the Trans-Atlantic Trade, and Investment Partnership, and any other trade-related measures when they are brought before the Congress for consideration.”

8) Pence started as a Democrat

Yep, you read that one right.

In an 2010 interview with CBN News, Pence admitted to being a huge fan of former President John F. Kennedy.

“It may be that I grew up in a big Irish Catholic family like he did,” Pence said. “Maybe it was that my grandparents were so proud of the first Irish Catholic president.”

Update 6:19pm CT, July 14: Following a deadly attack in Nice, France, that has left dozens of people dead and more than 100 wounded, Trump postponed the announcement of his vice presidential pick, which was scheduled for Friday morning.

In light of the horrible attack in Nice, France, I have postponed tomorrow's news conference concerning my Vice Presidential announcement.