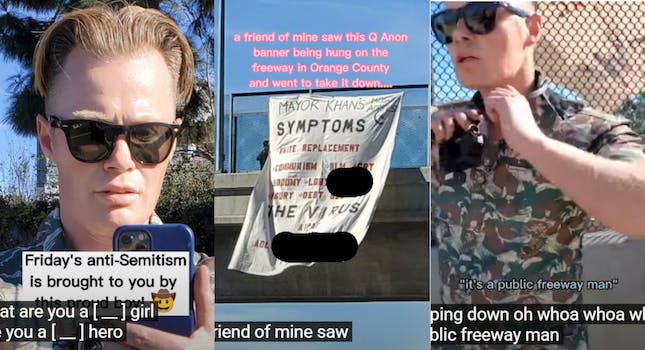 ‘What are you, a f*cking girl?’: White supremacists confront man taking down their antisemitic banner on the freeway

White supremacists yelled and bullied a man trying to take down an antisemitic freeway banner in Irvine, California.

The 32-second video shows two white men aggressively yelling at another man who appears to be taking down a banner. Originally posted on @sami_joji’s TikTok but banned for content, the video blew up on the Reddit thread PublicFreakout yesterday. Reddit user @itsreallyreallytrue’s re-posting of the video accrued more than 31,500 likes on Reddit as of press time.

In it, a virulently antisemitic banner can be seen hanging on a freeway overpass. The video is narrated through text overlays:

“A friend of mine saw this Q anon banner banner being hung on the freeway in Orange County and went to take it down… Then this happened.” (It’s unclear if the banner actually relates to the QAnon movement.)

Two men angrily come up to the person recording the video.

“Is this you boys?” asks the video creator.

“Yeah, you f****t. Why are you fucking ripping down our property?” says the man.

“It’s a public freeway man, a lot of people don’t want to read that stuff,” says the creator.

“Who the fuck are you, are you the highway patrol?” says the man. At this point, the two men notice the sign has been cut down on one side and continue to verbally attack the creator.

“You cut our fucking shit? What are you, a fucking girl?!”

“I have a video of my friend being confronted by white supremacists/anti-semites here in OC, and was hoping you’d be able to help spread awareness to it? Thank you!,” says @Sami_Joji.

The Daily Dot has reached out to @Sami_Joji for comment.