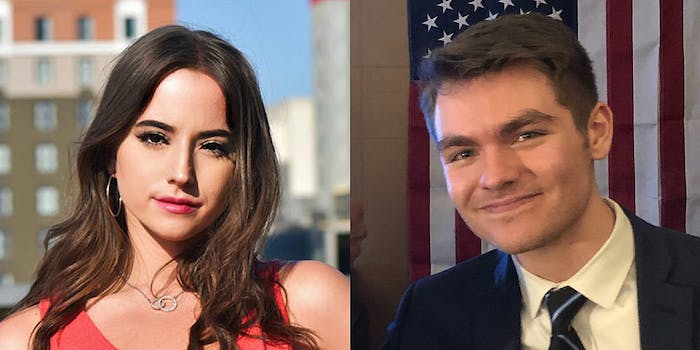 White nationalists and other figures of the alt-right have launched a purity war against MAGA stars they believe to be grifters. And they’ve chosen YouTube as their battlefield.

The takedown began after Clair criticized Republicans’ hyperfocus on immigration while a guest on a podcast a few weeks ago.

“The right’s losing elections because of this … So, like, in Colorado, the biggest issue among Republican voters is immigration. You know how many illegal immigrants we have here? Like fucking 12,” Clair says.

She laments that Democrats care most about education, “things that actually matter.”

“They’re just screwing themselves over with this identity politics and ‘build the wall’ and this is all we care about,” she added.

Clair later walked back these comments in a series of tweets in which she claimed to be all about building that wall and fighting the Democrats.

But that was too late because the alt-right had already latched on.

On June 12, failed Papa John’s savior Nicholas Fuentes climbed up into his big boy chair at America First and launched a vicious attack on Clair, whose latest claim to fame was accusing an Uber driver of MAGAphobia.

On the episode, Fuentes says, “Tonight we are talking about a grifter from the magazine Human Events who’s going to be exposed. Now she happens to be an egirl, happens to be a Jewish egirl. Not that that has anything to do with anything at all, but it is true.”

For about a half-hour, Fuentes attempts to make a meal of Clair by accusing her of being the epitome of a certain set of con artists who have infiltrated conservatism: hot chicks. They are able to do this, he says, because there “are not a lot of pretty women hanging around” the movement.

In addition to a very amusing failed attempt to pronounce “Quinnipiac,” Fuentes claims that Trump’s poll numbers are plummeting thanks to “MAGA grifters” like Clair.

Near the end of the segment, Fuentes, looking thrilled as a 12-year-old who gets to stay up until midnight, makes the stunning accusation that Clair used to be “a sex worker who went by the name sexlaptop.”

While it does appear to be true that Clair once went by “sexlaptop” on Vine, the Daily Dot could find no evidence that she was ever a sex worker.

The day after Fuentes’ show aired, fellow far-right YouTuber Paul R. Ramsey a.k.a. RamZPaul dropped an episode called “MAGA Grifters” about Clair’s immigration comments. In it, Ramsey calls her apology a “basic bitch talking point” and wonders if “MAGA was just a scam.”

“These people don’t conserve anything, they don’t stand up against evil, they just fold. They just wanna make a lot of money,” he says.

Elsewhere, there is other evidence of fractures on the right.

A YouTuber who goes by the handle Russian Doll recently let loose about “tradthots,” defined in Urban Dictionary as “a single white woman who claims to support traditional values in order to gain money and orbiters.”

“I also realized that there was a group of young women online who spoke all the conservative talking points and called themselves traditional wife material while pushing their cleavage into the camera so that thousands of confused men would donate money to fund their lavish, non-committed lifestyle,” she says of her conservative awakening as images of beautiful young women with censor boxes over their cleavage flash on-screen.

Single tradthots are a particular scourge according to her.

“For every modestly dressed and spoken conservative woman there are hordes of tradthots like Ashton Birdie for example who parrots Republican slogans point for point while wearing a MAGA hat and a low-cut top… She’s not even trying to hide her appeal.”

Whitty (who goes by @ashtonbirdie on Instagram) herself, went viral for an exchange she had while reporting for InfoWars.

Southern also came under fire from Milo Yiannopoulos, who accused her of taking part in Caolan Robertson and George Llewelyn-John’s alleged efforts to both defraud and expose the far-right to their enemies.

In an explosive article, Yiannopoulos writes that Southern continued employing the pair as her video producers after becoming aware that they were stealing money from her and others, and of meeting with the anti-racism and -fascism organization Hope Not Hate, with whom they were working.

It also claims that she exchanged sex for help with her career. Southern “categorically denies everything.” According to Yiannopoulos, she does admit to knowing that the pair were in contact with Hope Not Hate, to meeting with them herself “for a laugh.” (Disclosure: Yiannopoulos was the founder of the Kernel, a defunct publication that the Daily Dot acquired in 2014.)

In addition to the salacious and potentially criminal accusations, the article paints a picture of a once-close community in disarray.

Because it’s not just the women. Russian Doll has similarly harsh words for Ben Shapiro, whom she calls “cry-baby Ben” in an episode about him cutting a BBC interview short. “I find one of the men who made me more conservative frankly unbearable,” she says of Shapiro.

Despite being right-wing himself, Shapiro has become a favorite target of extremist YouTubers.

Though Molyneux says he “generally likes” Carlson, he describes the debate in the video’s description thusly, “Tucker Carlson squares off against Ben Shapiro about economics, freedom and the destructive side of capitalism. The level of ignorance was shocking, the debate reached levels of sophistry and manipulation that shouldn’t even be possible.”

Self-described “American nationalist” James Allsup posted his own Shapiro takedown last October, “Ben Shapiro’s Nationalism Hypocrisy,” which basically goes after him for not being racist enough. A little more than two years into the Trump presidency, it appears as if the far-right is collapsing in on itself like a dark star. Accusations of grifting and ideological purity tests may be only the beginning.

As Fuentes says, “This is why the right is failing.”