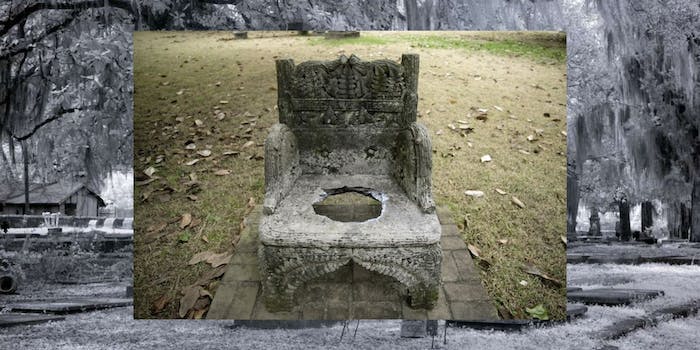 Officials in Selma, Alabama confirmed the theft on Monday.

A left-wing group has taken credit for the theft of a Confederate monument that is said to have disappeared from an Alabama cemetery last month.

The monument, known as the Jefferson Davis Memorial Chair, was allegedly stolen from the Old Live Oak Cemetery in Selma by a group calling itself “White Lies Matter.”

News of the theft began circulating online Monday after the activist group claiming responsibility issued a list of demands.

Speaking with AL.com, White Lies Matter said it would give the chair back to its owners, a group known as the United Daughters of the Confederacy (UDC), if the organization agreed to hang a banner outside of its headquarters in Richmond, Virginia.

White Lies Matter says the banner must include a specific quote from Black Liberation Army activist Assata Shakur that states: “The rulers of this country have always considered their property more important than our lives.”

Shakur is labeled by the FBI as a “Most Wanted Terrorist” for killing a New Jersey state trooper in 1973.

White Lies Matter further states that the banner must be present at 1pm on Friday and left up for 24 hours to commemorate the anniversary of the Confederacy’s surrender during the Civil War.

“Failure to do so will result in the monument, an ornate stone chair, immediately being turned into a toilet,” the group told AL.com. “If they do display the banner, not only will we return the chair intact, but we will clean it to boot.”

White Lies Matter members provided numerous photographs to AL.com that appeared to show the monument in their possession.

Prior to the theft being confirmed on Monday, the Daily Dot spoke with city officials, the Selma Police Department, and eventually a UDC member about the theft.

City officials referred the Daily Dot to several different individuals before suggesting that a phone call be made to “Benny,” a local automotive business owner who may have information on the theft. The business in question did not answer the phone.

A similar situation unfolded when the Daily Dot contacted the Selma Police Department, which transferred the call to multiple officers as well.

It wasn’t until the Daily Dot contacted the Old Live Oak Cemetery directly that it was told to speak with the owner of the land that the monument occupied: Patricia Godwin.

When answering the phone, Godwin introduced herself as a member of the UDC and remarked about media sensationalism when questioned about the alleged ransom.

“That’s some of you media sensationalism…” Godwin said. “I’ve dealt with all you people for over 20 years with your sensationalism.”

Godwin confirmed that the monument had in fact been stolen but claimed not to know who was responsible. When the Daily Dot mentioned the White Lies Matter group that had taken responsibility, Godwin responded by sarcastically stating that “white lives obviously don’t matter” before bemoaning the term “white privilege.”

Godwin added that the UDC is offering a reward, reportedly $5,000, for the monument’s “safe return.”

White Lies Matter argued in a statement to AL.com that the monument, “Like most Confederate monuments… exists to remind those who’s [sic] freedom had to be purchased in blood, that there still exists a portion of our country that is more than willing to continue to spill blood to avoid paying that debt down.”

It remains unclear whether the UDC will comply with the demands from the activist group.