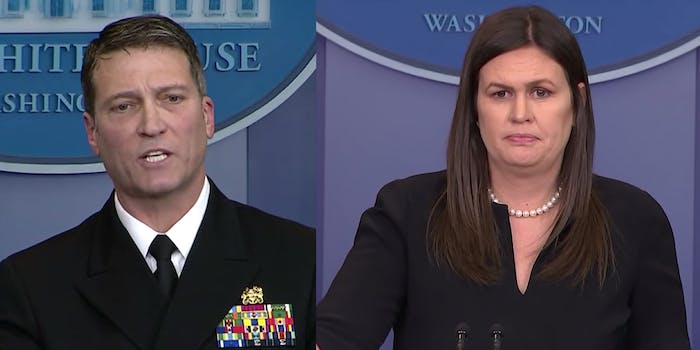 Reports of his behavior are concerning.

Allegations of improper conduct are mounting against Dr. Ronny Jackson, a White House physician and President Donald Trump’s nominee for Veterans Affairs secretary, even as Jackson says he will not back out and the White House defends him.

Jackson once provided such a “large supply” of the opioid drug Percocet to a White House Military Office staffer that the office went “into a panic” because it didn’t know where the drugs went, according to a report compiled by Democrats on the Senate Committee on Veterans’ Affairs.

Democratic lawmakers said interviews with Jackson’s current and former colleagues “raised serious concerns about Jackson’s temperament and ethics, and cast doubt on his ability to lead the second largest agency in government,” according to NBC. The panel on Wednesday released a two-page summary of the interviews.

The document details various instances of workplace misconduct and drunkenness, including that Jackson became intoxicated at a Secret Service going away party and “wrecked a government vehicle,” which the doctor denies.

“I have not wrecked a car. I can tell you that,” Jackson told reporters at the White House, adding in response to other allegations that he had “no idea where this is coming from” and that “we’re still moving ahead as planned.”

White House press secretary Sarah Huckabee Sanders said on Wednesday that she could not speak to the credibility of specific allegations, according to the New York Times.

“None of those things have come up in the four separate background investigations that have taken place,” she said. “There’s been no area of concern that was raised for Dr. Jackson specifically.”